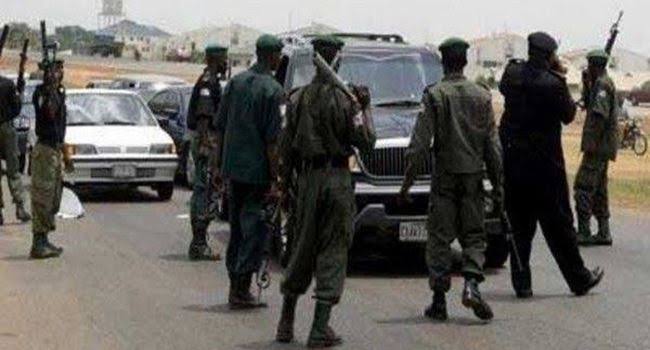 To any doubting Thomas, encountering over 100 roadblocks on the Lagos-Badagry-Seme Expressway in Lagos State is unbelievable.

However, our investigations reveal this to be the sad truth on the international expressway that leads to the Republic of Benin.

Under the guise of using the roadblocks and checkpoints to checkmate smuggling activities and providing security along the expressway and around the Seme border and its environs, security agents including officials of the Nigeria Customs and men of the Nigeria Police Force had been allegedly subjecting unsuspecting members of the public to traumatising experiences all in a bid to extort them of their hard-earned money.

“From Badagry to the Seme border alone, we have more than 50 roadblocks on the road and you will encounter close to 20 roadblocks returning to Badagry from Seme.

“Majority of these illegal roadblocks are police checkpoints. The NCS also have more than the required roadblocks on the expressway. Other security agents also have roadblocks there. All they do is harass and extort money from people; the situation is dangerous,” a community leader, Amusa Ayodele, said.

The conundrum of smuggling activities across routes leading inbound and outbound the border towns in Nigeria is said to be alarming.

To nip the situation in the bud, the Nigerian Customs Service was commissioned to, among other reasons, stop smuggling activities, arrest and prosecute smugglers.

But in the line of carrying out enforcement duties, the agency’s officials and smugglers engage in bloody clashes that often result in human deaths, arrests and prosecution of smugglers. Seizures of contraband items worth billions of naira were also recorded.

Despite relentless clampdown on smugglers that usually caused tension that sent shivers down the spines of people in communities across border towns in Nigeria, the criminal smuggling activities have continued to wax strong.

However, the NCS and other intervention forces approved by the government to carry out specific functions at its borders have remained resolute in the campaign against smugglers and their illegal activities.

In the resoluteness, the security agents devised contingency plans to outwit criminal elements desirous of profiting from the smuggling business in the country.

Along various expressways leading to the points where Nigeria shares land borders with the Republic of Benin, Chad and Cameroon, and the Republic of the Niger, checkpoints are common sight.

It is absolutely impossible to ply the routes without seeing NCS officials, among others, flagging down suspicious vehicles for thorough checks.

But people, particularly indigenes and residents living across border towns have argued that smugglers still have their way as they alleged culpability on the part of some corrupt security agents, including officials of the Nigeria Customs.

While lamenting over the avalanche of roadblocks along the international expressway, Ayodele said all the mobile patrols operating along the route have created roadblocks.

“This is the reason we have multiple checkpoints (roadblocks) despite the government approving only two checkpoints on this route. The two checkpoints are at Agbara and Gbaji along Lagos – Seme expressway,” he added.

As the situation persisted along the expressway, and on some other roads leading to and from the country’s border, extorted victims, including commercial motorists, motorcyclists, traders and residents, who were angered by the illicit practice, tendered tons of complaints to the government and its assigned regulators.

This was as experts also argued that the proliferation of unapproved checkpoints/roadblocks at the various international routes along the country’s border was a disturbing sight, describing the situation as unwelcoming to foreign investors and very important personalities of local and international repute.

To curb the situation and in a bid to ease the ways of doing business in Nigeria, the Comptroller-General of Customs, Hameed Ali, while acting in line with the directive of the Presidential Enabling Business Environment Council in July 2017, ordered the dismantling of unapproved checkpoints/roadblocks built outside 40 kilometres to the border.

A circular issued to that effect read in part, “For the avoidance of doubt, it is hereby emphasised that check-points mounted outside 40 kilometres to the border are illegal, while information patrols outside this point should not last more than 24 hours at any given time.

“To further clarify these issues, it should be reminded strongly, that only two checkpoints situated at Agbara and Gbaji, along Lagos-Badagry-Seme road are statutorily approved.”

Despite the government directive, the creation of roadblocks witnessed an exponential increase along the Lagos-Badagry-Seme international expressway.

In November 2019, the Federal Government banned the supply of petroleum products to filling stations within a radius of at least 20km from all borders in the country.

However, while some border towns were granted waivers, others, including the Seme border in the Badagry West Local Council Development Area of the state were affected.

He said, “After the FG’s announcement, filling stations along the 20km mark, down to the Seme border area stopped receiving PMS. So, people usually come as far as Badagry roundabout, Oloko or Aradagun areas to buy fuel and take it back to their various homes along the Badagry-Seme expressway and the border area for their domestic use.

“Also, because of the border closure, traders no longer go to the Benin Republic to buy goods and some other food items. They go to Badagry Market, Trade Fair and Alaba Market, among others, to buy things. On their way back, they also get extorted at these roadblocks that are over 40 on the expressway to the Seme border.

“Customs roadblocks are at Asipa, Gbethromeh, Agonvi Sea Beach, Ganyingbo Sea Beach (Yard), Atindeka House by a small bridge, Celestial Church at Gbaji, the approved checkpoints at Gbaji for the Seme Command and FOU Ikeja, Oloko, Iya Yafin, among others. But the police checkpoints are over 40.

“The extortion has been going on for about four years and the amount of money generated from the illegal roadblocks would have run into billions of naira. To know the illegal checkpoints on the Lagos-Badagry-Seme expressway, when top government officials are passing, you won’t see them on the road.”

In the daytime and at night, under the guise of using the checkpoints/roadblocks to stop smuggling activities, security agents, in a manner described as condescending, subject commercial transporters, motorists, traders, residents, among others, to different forms of suffering to extort them.

Ayodele and Godonu, alongside other stakeholders consisting of transport workers, traders, residents and indigenes in the Badagry division, bitterly expressed worry about the challenges they experience daily on the international road.

However, to confirm the number of roadblocks and to subject the stakeholders’ claim of extortion to a litmus test, our correspondent embarked on an audacious expedition that exposed how corrupt security agents had been using illegal roadblocks to extort money from people in the division.