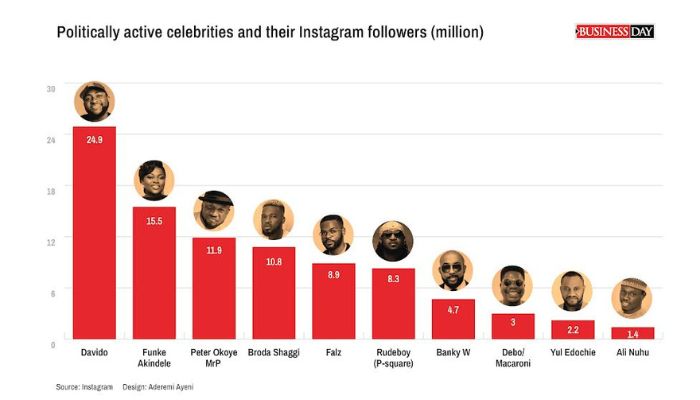 Celebrities, influencers in race to turn followers into voters

After his secondary school education, Debo Adebayo moved on to study Law at Lead City University, Oyo State. But he left the university when he discovered that Law was not accredited at the time.

The social media influencer, now 29 years old, proceeded to Houdegbe North American University in Cotonou, the Republic of Benin, to continue his legal studies but all to no avail.

He then enrolled at Afe Babalola University for the same course. But what he described as a “little trouble” meant his law career would still not kick-off.

After three unsuccessful attempts to study Law, he decided to pursue Theater Art at Redeemers’ University. And that worked.

The frustration that emanated from dropping out of three schools pushed Adebayo, now popularly known as Macaroni, to start creating content.

By sheer hard work and serendipity, many people found his comedy skits appealing and became fans. Thus began the journey of one of Nigeria’s social media influencers.

Fast forward to October 2020, the activist side of the comedian that had ignited the desire to study Law in him overtook him again when he, along with other social media influencers, led thousands of Nigerians in protest against police brutality during the #ENDSARS campaign.

Currently, he is at the forefront of youth participation in politics ahead of the next election in the country.

Macaroni is just one of the many celebrities and influencers in Nigeria leading the charge of political education and campaign as the 2023 election approaches. These celebrities are in a race to persuade their followers into aligning with their political leanings.

An example of this is Davido’s live performance before the governorship election in Osun State. A bulk of the attendees, who were his fans, belonged to the age bracket of 18-34 that, according to Independent National Electoral Commission (INEC) data, constitutes the largest voting population in Nigeria.

The number of completed registrations for Permanent Voter’s Card stood at 12.2 million as of 7 a.m. on August 1, the day after INEC concluded the voter registration exercise, with 8.8 million being youths aged 18 to 34.

Samuel Perry, a Nigerian comedian, popularly known as Broda Shaggi, with 10.8 million followers on Instagram, had in a viral video skit encouraged his fan base to shun voting apathy come 2023 or face another eight years of suffering.

Nefertiti, who has over 287,000 followers on Twitter, is one of the social media influencers who have laid bare the parties they are rooting for and regularly encourage their followers to support their presidential candidates.

“Peter Obi is a Good Man, that’s why I’m sold out for him. He takes corrections, he is not above mistakes. He is a proper human being: emotionally intelligent, humane & kind, more-so, OBIdient to fatherland. Many may not understand these virtues. WHO WUD BLAME THEM?” she said in a tweet.

Reno Omokri, with 1.9 million followers, tweeted: “The Naira can only rise when we manufacture in Nigeria and buy made in Nigeria. Atiku has said that under his leadership, the Federal Government will patronise everything Nigerian. That is the ONLY way Naira will rise. Vote Atiku if you want a stronger naira.”

Ọláwálé Ọlọ́fọọ̀rọ̀ (Brymo), a music artiste, who has 491,100 followers, is backing Bola Tinubu. “Yet… he’s the one with a plan, we all know that… Let a city boy be president for once!.. never met the man, or anyone who represents, or is acquainted to him, or even his relations and political affiliates – and if we stopped trying to kill them off for being old.”

According to DataReportal’s July 2022 report, social media activities, the most common medium of exchange and discussion between celebrities and their fans (aged 16 to 64) were highest on Facebook, Instagram, LinkedIn, Twitter, Tiktok, and others.

A survey conducted by a media agency, We Are Social, revealed that 22 percent of internet users worldwide follow an influencer.

Deolane Bezerra, a 33-year-old criminal lawyer, launched a YouTube reality programme on her personal tragedy, which drew a lot of Brazilians’ attention. She now has over 14 million Instagram followers, a number almost at par with the population of Zimbabwe.

Bezerra also recently met Luiz Inácio Lula da Silva (Lula), who served as the 35th president of Brazil from 2003 to 2010. Lula wants to reclaim his job in the upcoming presidential election.

Akin to Brazilians, many Nigerian internet users may identify with or relate to the stories of their favourite celebrities, unlike politicians, who are largely present during election seasons.

This could explain why the majority of these influencers have more followers on social media than politicians and why politicians court celebrities to access their fandom.

However, can celebrities turn their followers into voters? Here is what their fans have to say.

“As a fan of Falz, Davido, and Mr Macaroni, I will vote for any of these celebrities if they run for office,” Esther Babajide, a 23-year-old digital marketer, said.

She said she would vote for them not only because of their creative and entertaining social media content, but also because they have demonstrated political consciousness, dedication, and leadership experience.

“We fans want to know their political ideology, and we can learn about it through their activities and political engagement. Build your political CV as a celebrity interested in politics.” Babajide is one of the 8.8 million Nigerians who registered to vote as of the end of the Continuous Voter Registration exercise on July 31, 2022.

Ese Eniweniye, a political science graduate and general manager at Flowerplus, said while followers or fans are influenced by what celebrities share or say as some are role models, their fan base may be hesitant to vote for them if they lack visible leadership experience.

“Just because you can act perfectly in movies does not mean you can deliver results as a politician,” Eniweniye said.

Femi Solaru, quality control officer at Lifebridge RX Pharmadeco, said: “I follow a celebrity based on his contents, not because of political inclination or ambition.”

Wale Adegbenro, a 33-year-old entrepreneur, said he would consider voting for his favourite celebrity if he or she is well-versed in leadership or has sufficient leadership experience.

In this regard, Daniel Agbaje, a 25-year-old entrepreneur, said social media influencers or celebrities cannot influence election results. “They can only persuade others to see the benefits of the party for which they are campaigning. It is up to the voters to choose who they want to vote for,” he said.

He added: “We all know every celebrity has faithful and die-hard fans but nevertheless, they can only turn a few of their followers into voters because the career they had in their various industries is different from politics. Followers are scattered all around the country. It’s difficult to transform the followers into votes.

“I will only vote for competence, doggedness and the willingness to truly serve and represent the entire country practicing a true democracy and not just because a candidate is my favourite Nigerian celebrity.”

Mark Idahi, a communication strategist, believes celebrities have the ability to influence their followers.

“We’ve seen celebrities with 2 million followers, and some with 10 million, but we’re not sure if they’re positive culture shapers. If someone with the wrong values happens to have such a large following because of his or her career, what happens is that this person can impact negative values on the followers,” he said.