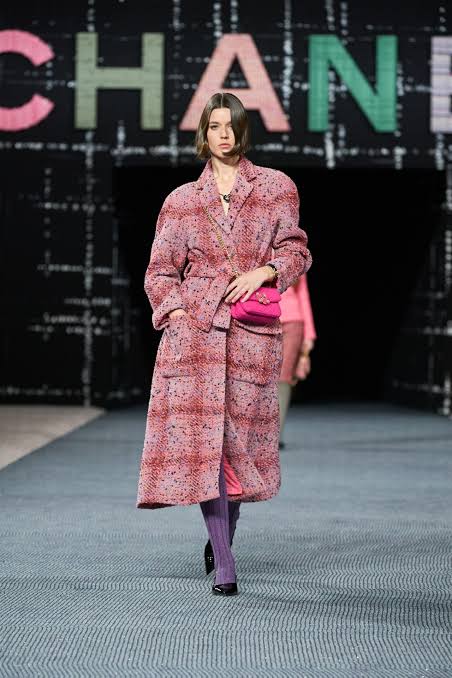 Chanel Made History As The First European Luxury Brand To Showcase Fashion In Sub-Saharan Africa.

As part of a three-day schedule of cultural events in the capital of Senegal, Chanel made history as the first European luxury brand to present a fashion show in sub-Saharan Africa.

Models strutted down the catwalk in geometrically patterned skirts and pantsuits inspired by the colourful Sapeurs counterculture of the 1970s, which were topped with beaded vests. The 850 attendees applauded loudly as the retro-inspired lineup, which featured flared jeans, platform shoes, and tiered skirts, was revealed.

It was a potentially dangerous exercise for the French luxury brand, which sought to deflect any allegations of cultural appropriation by asking a number of local artists to collaborate on the event and disclosing a variety of long-term projects to encourage craftsmanship and sustainable farming, including the first international exhibition to be presented by its 19M speciality workshop hub in Paris.

Virginie Viard, the creative director, admitted she had never been to Africa but claimed she was drawn to Dakar after hearing about it from friends and associates who frequently visit the city, which in recent years has developed a reputation as a thriving centre for art.

“I thought it would be sweet and fun to do something that wasn’t tied to a store opening,” Viard told WWD. “I wanted a creative exchange and I thought that would work well with the Métiers d’Art collection.”

She continued “Collections are all very well, but I need to be moved. It has to be alive, it has to connect to other disciplines.”

Malick Bodian, a Senegalese photographer, shot the look book, and Kourtrajmé, a Dakar-based film school founded by French director Ladj Ly, created a number of videos to accompany the line. According to Viard, the goal is to promote lifelong bonds.

In her words,  “I know that all the people here will be working with us again.”

Acogny said that Chanel had been courteous in its approach in anticipation of any criticism.  “I don’t think Chanel came here to force anything upon us. We cannot accept anyone coming to colonize us again, let this be clear.”

The following day, she spoke to pupils and stated, “I don’t think Chanel came here to force anything upon us. Please understand that we cannot accept anyone coming to colonise us once more.