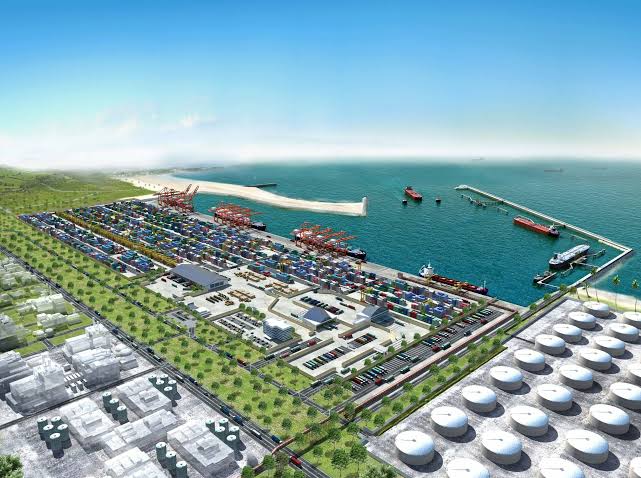 The Lekki Port is one of the biggest deep-sea ports in West Africa expected to generate $361 billion revenue for the Nigerian government while also providing close to 200,000 job opportunities for the nation’s teeming unemployed youths.

The Vice President of CHEC, Mr. Wu Di, who also doubles as a Director of Lekki port at the construction completion ceremony, disclosed that the construction of the port officially started on June 15, 2020, and was completed on Monday, October 24, 2022.

This was as the Lagos State Governor, Babajide Sanwo-Olu, assured that his government was working hard to provide ample ambience for transportation infrastructure, saying that works are ongoing to develop a six lane road network in the Ibeju-Lekki port axis to avoid traffic congestion

Di revealed that the total contract value of the EPC for the project’s first phase was $581 million.

He added that the completion of the construction would pave the way for the container terminal operator, the Lekki Free Port Terminal (a subsidiary of CMA/CGM group), to take over the Port in readiness for the start of port operations.

Sanwo-Olu expressed delight with the completion of the construction of the port.

Sanwo-Olu reaffirmed Lagos State Government’s commitment to the timely delivery of the road infrastructure network around the Ibeju Lekki axis to ensure the seamless evacuation of cargo from the port.

He also called on both local and foreign investors to invest in the state, adding that the zone was specifically designed for encouraging investments into the State.

In his remarks, the Chairman, Board of Directors, of Lekki Port, Mr. Biodun Dabiri, expressed appreciation to the promoters of the project, CHEC and Tolaram, for the bold decision to invest in maritime infrastructure which would help in Nigeria’s journey to economic prosperity.

Dabiri acknowledged the critical role played by Sanwo-Olu in resolving the various challenges encountered in the construction of the port, especially during the COVID-19 pandemic and attendant lockdown.

“We are pleased to celebrate the completion of construction of the port and the effective handover of the facilities by Lekki Port from the EPC Contractor, CHELE), a subsidiary of CHEC,” he said.

Also speaking, the General Project Manager of CHELE, Mr. Xie Xianju, expressed delight that the construction was now completed. He noted that the port would be the destination of choice because it is the first deep sea port with a capacity to take large vessels. He commended the team, partners and suppliers for their contribution to the successful completion of the construction.

Delivering the goodwill message on behalf of Tolaram (promoter and shareholder), the Managing Director of Lagos Free Zone, Mr. Dinesh Rathi, expressed delight at the timely completion of the construction of the port. He noted that the port would further position LFZ as the next frontier for investment in Nigeria and increase foreign direct investment to Lagos State and Nigeria.

The Chinese Ambassador to Nigeria, Ambassador Cui Jianchun commended CHEC for displaying excellence in their project skills and promoting China’s commitment to Africa’s infrastructure development drive. He noted that the project was a good example of what can be achieved when Nigeria and China cooperate and he looked forward to more of such projects.

Lekki Port has been described severally, as a game changer that would boost the growth of the Nigerian economy, creating about 170,000 direct and indirect jobs, generating approximately $361 billion during the period of the concession, and generating over $201 billion in revenue for both Lagos State and the federal government.