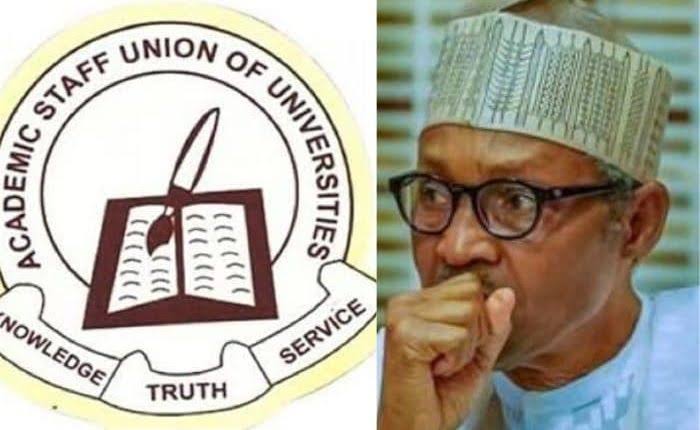 President Muhammadu Buhari’s administration has set an unenviable record of 584 days and still counting as the number of days Academic Staff Union of Universities (ASUU) have gone on strike since 2015.

The ASUU strike that entered its 185 days on Wednesday, August 17 is set to continue as the meeting between the federal government and the leadership of the lecturers’ union on Tuesday ended without an agreement.

The leaders of ASUU that met with the Nimi Briggs Committee at the National University Commission (NUC) in Abuja revealed that the renegotiation committee did not come up with any new offer on the table.

Emmanuel Osodeke, the national president of ASUU on Tuesday, August 16 stated that there are hopes that the lecturers would go back to their lecture room as the issues of IPPIS and UTAS have been put to rest as agreed with the federal government accepting to implement the UTAS payment system.

“The issue of IPPIS and UTAS has been put to rest. If the government agrees with us tomorrow, everything will be resolved,” he said.

However, with recent development, ASUU will wait on its national executive council (NEC) meeting on Sunday, August 28 to decide the next line of action either to call off the strike or otherwise.

In 2016, ASUU went on strike for 7 days, and in 2017 it witnessed 35days of the strike. In 2018, ASUU downed tools for 19 days and this continued till February 8, 2019. 2020 witnessed a whopping 9 months of ASUU strike following its disagreement with the federal government over the funding of the universities and implementation of the payment system.

Many Nigerians thought that the public universities were going to experience a strike–free academic sessions having come off the pandemic trauma in 2020 only for this ugly academic monster to step on stage again on February 14, 2022, and is now on its 185 days and still counting.

From 2007 to 2010 President Umar Yar’dua, ASUU had 127 days of strike action. The immediate former President Goodluck Jonathan’s government from 2010 to 2015 experienced 359 days of ASUU strike.

ASUU has maintained among other things that the federal government must implement the renegotiated 2009 agreement, jettison the Integrated Payroll and Personnel Information System (IPPIS) for the University Transparency Accountability Solution (UTAS), etc.

Many Nigerians are worried that the federal government under the leadership of President Buhari is wasteful.

Friday Erhabor, the director media and strategy at Markelenz Limited described the situation as wasted.

“Wasted! Nigeria wasted the first six months of 2022 on the ASUU strike in the most critical section of our economy which is education. We have arrested the development of our students for six months. We can’t quantify the loss. Even if we try to quantify it in naira and kobo, we can’t quantify it in terms of the psychological trauma it has on students and lecturers as well as parents. We are a wasteful nation!!” he said.

Bamidele Okuwoga, a legal practitioner believes the federal government has failed the citizens by not being able to bring to an end the lingering strike even after seven months.