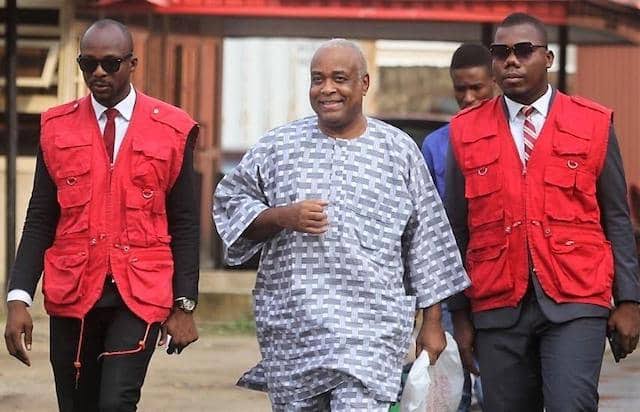 The Economic and Financial Crimes Commission (EFCC) on Monday arraigned John Abebe, a younger brother of the late former First Lady, Stella Obasanjo before the Lagos State Special Offences Court in Ikeja over allegations of fraud.

Some of the counts against the defendants read: “That you Dr. John Abebe and Kamoru Alade Oladimeji, on or about the 4th day of June 2013, in Lagos within the jurisdiction of this Honourable Court conspired amongst yourselves to commit felony to wit; stealing the sum of N120 million property of Arsenal Technologies Limited.

“That you Dr. John Abebe and Kamoru Alade Oladimeji, on or about the 4th day of June 2013, in Lagos within the jurisdiction of this Honourable Court conspired amongst yourselves to commit felony to wit; obtaining by false pretence the sum of N120 million property of Arsenal Technologies Limited under the pretence that your property lying being and situate at 9, Magbon Close, Ikoyi-Lagos State, which you pledged as the security to the Arsenal Technologies Limited was unencumbered, which representation you knew to be false.”

The defendants, however, pleaded not guilty to the charges.

After their pleas were taken, the prosecutor, Sulaimon, urged the court to fix a trial date and to remand the defendants in the custody of the Nigerian Correctional Services until the hearing and determination of the charge.

However, the defense counsel, Anthony Popo and Sam Etaifo urged the court to grant their clients bail in the most liberal terms.

While moving the bail application on behalf of Abebe, Popo told the judge that the matter before the court was a commercial transaction between the first defendant and the nominal complainant, which he was ready to settle out of court.

The lawyer also claimed that Abebe had paid back the sums of $100,000 and N30 million to the complainant and had also deposited the title document of 26 acres of land and the documents of a property in London to show his seriousness to resolve the matter.

He also pledged that the defendant would not jump bail since he never violated the terms of the administrative bail granted to him by the EFCC.

The prosecutor did not oppose the application but only urged the court to impose sufficient terms that will ensure the defendant’s appearance in court for their trial.

In her ruling, Justice Abike-Fadipe granted the first defendant bail in the sum of N20 million with one surety in like sum.

She also directed that the surety must be a resident of Lagos and must deposit the title document of a land property whose value must not be less than N20 million.

The judge also admitted the second defendant to bail in the sum of N10 million with one surety in like sum, who must be a resident of the state.

Justice Abike-Fadipe further ordered that the defendant shall continue to enjoy the administrative bail earlier granted to them by the EFCC but if they failed after seven days to perfect the terms of the bail she granted them, they shall be arrested and remanded in prison.

The matter was adjourned till December 6, for the commencement of the trial.