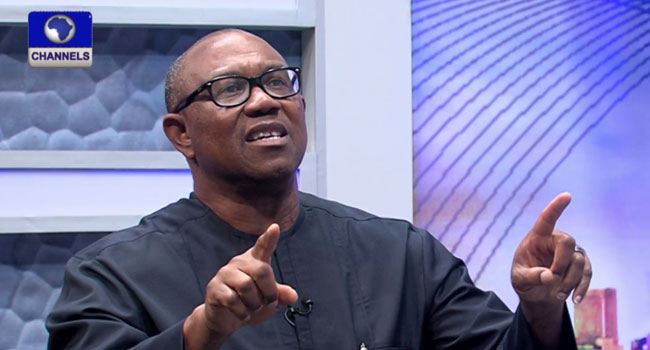 The Labour Party presidential candidate assured Nigerians of no less than 20,000 megawatts in fours years as president.

The presidential candidate of the Labour Party, Peter Obi, has promised to copy what was done in South Africa and Egypt to tackle the issue of power generation and distribution in Nigeria.

Obi made this promise during The Peoples Townhall, a live event organised by Channels Television and its partners on Sunday.

The former Anambra State governor had last year travelled to Egypt admittedly to understudy how the North African country solved its power problems in a very short period.

“We have to open up like South Africa has done. They have power issues like us, even [though] they are 60 million and they are generating almost 40-something-thousand, they declared [a state of] emergency and said anybody can generate up to 100,000 megawatts without licence,” he said.

“If somebody who is 60 million (sic) generating almost 50,000 declared [an] emergency, we declare war here on power. If it will consume everybody, it will consume us, but we will get power.

“Egypt did the same thing. Egypt had about 20,000. One of their studies showed that power is a critical issue. Today, Egypt is generating almost 50,000. In fact, Egypt is exporting power to Europe. If these things can be done around us – South Africa and Egypt – why not Nigeria?”

The Labour Party flag bearer said if elected president in February, his administration will generate and distribute no less than 20,000 megawatts within four years in office. He, however, said he would try to exceed the target.

Vowing not to fail like past governments, Obi promised to show Nigerians what they have never seen before, saying that his administration would usher in a generational change.