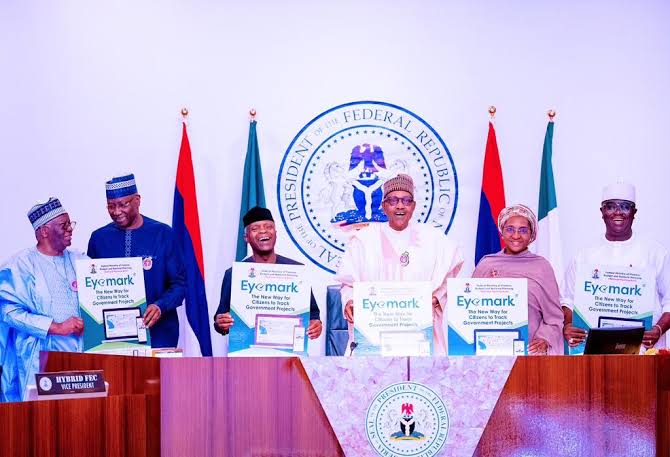 Buhari launched the project monitoring website (www.eyemark.ng) with its accompanying mobile app shortly before the weekly Federal Executive Council meeting at the council chambers of the Presidential Villa, Abuja.

The President noted that the federal government could no longer depend on its handful of Monitoring and Evaluation teams to oversee the vast number of infrastructure projects spread nationwide.

He said that given that his regime has invested in infrastructure projects more than any other before, it is only fitting to create adequate avenues for close monitoring by citizens.

He said this will close the existing gaps and promote citizens’ participation in governance.

Buhari also blamed the spate of corruption on the poor implementation of infrastructure projects across the country.

With EYEMARK, the president said, “The status of projects, total amount appropriated and dispensed so far are now available in the public space.”

However, he warned that relying on the public comes with the risk of misinformation.

Therefore, EYEMARK has been equipped with spatial technology to track images and ascertain their origins.

“If a user is in Kaduna, we can determine the authenticity of the reviews. And we can know if the image was uploaded from the location the user claimed it was sent from,” he explained.

Agba also revealed that the website and its accompanying app were developed by Nigerians of the average age of 24, with inputs from stakeholders and industry experts.

Before the meeting, the council observed a minute silence for a departed member, Demola Seriki, a former Minister of Agriculture and Water Resources under the Umaru Yar’Adua administration.

Before his death on December 15, Seriki, 63, was Nigeria’s Ambassador to Spain.

Others are Minister of States for Budget and National Planning, Clem Agba; Environment Sharon Ikeazor and Petroleum Resources, Timipre Sylva.