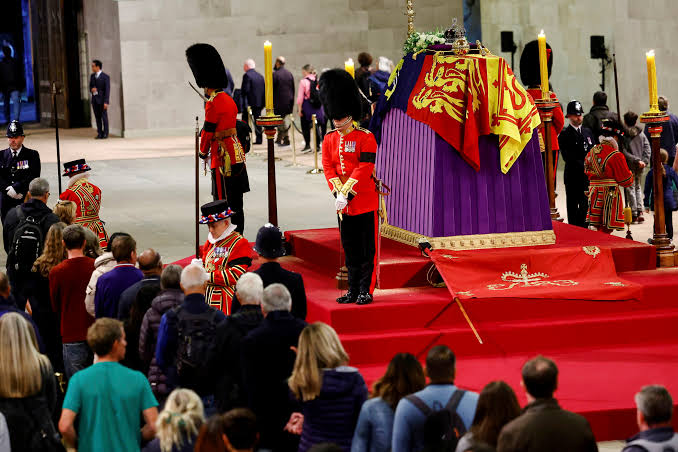 Thousands of police, hundreds of troops, and an army of officials made final preparations on Sunday for the state funeral of Queen Elizabeth II, as part of a display of national mourning that has been described as the biggest gathering of global leaders for years.

According to CBS News, the President of the United States, Joe Biden, as well as other dignitaries, arrived in London for the funeral, to which around 500 royals, heads of state, and heads of government from around the globe have been invited.

The late Queen’s eight grandchildren, led by heir to the throne, Prince William, circled the coffin and stood with heads bowed during a silent vigil on Saturday evening.

The miles-long queue at Westminster Hall closed to new arrivals on Sunday for everyone in line to file past the coffin before Monday morning when it will be borne on a gun carriage to Westminster Abbey for the queen’s funeral.

People across the United Kingdom observed a pause Sunday evening for a nationwide minute of silence to remember the queen, who died September 8 at the age of 96 after 70 years on the throne.

Monday (today) has been declared a public holiday, and the funeral will be broadcast to a huge television audience and screened to crowds in parks and public spaces across the country.

A tide of people continued to stream into Westminster Hall, where the queen’s coffin is lying in state, draped in the Royal Standard and capped with a diamond-studded crown.

The lying-in-state continues until early Monday morning when the queen’s coffin will be moved to nearby Westminster Abbey for the funeral, the finale of 10 days of national mourning for Britain’s longest-reigning monarch.

After the service Monday at the abbey, the late queen’s coffin will be transported through the historic heart of London on a gun carriage. It will then be taken in a hearse to Windsor, where the queen will be interred alongside her late husband, Prince Philip, who died last year.