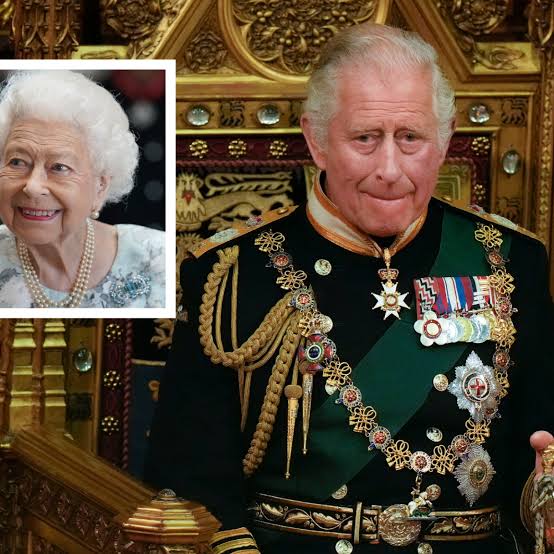 Eulogies from global leaders and leading personalities all over the world poured in for Queen Elizabeth II, the United Kingdom’s longest reigning monarch, as she died at the age of 96 on Thursday.

She died peacefully at Balmoral Castle, her estate in the Scottish Highlands in the afternoon marking the end of an era in the United Kingdom.

Her death, which was announced by Buckingham Palace, attracted glowing tributes from global leaders, who described her in glowing terms.

The crown passes immediately to her son and heir Charles, who will officially be known as King Charles III.

Two members of staff posted the formal notice of the Queen’s death on an easel on the railings of Buckingham Palace.

On Wednesday, there were concerns over her health when Buckingham Palace announced that she had postponed a virtual meeting of her Privy Council after being advised by doctors to rest.

On Thursday, the palace disclosed that she was under medical supervision, adding that she said she was “comfortable” at Balmoral.

Shortly after her death was announced, mourners gather at Buckingham Palace to pay tributes.

Born Elizabeth Alexandra Mary Windsor, she emerged the Queen in February 1952 after the death of her father, King George VI and reigned for 70 years.

The Queen’s demise was greeted with stunned silence around the world followed by reactions from global leaders and ordinary people as the flag was lowered at Windsor Castle, the Queen’s beloved home.

The new King said his mother’s death was a moment of “the greatest sadness for me and all members of my family.”

Into her 90s, the Queen maintained a rigorous calendar of events and appearances which reportedly numbered more than 400 in her diamond jubilee year.

Her public life was defined by public duties, some seemingly trivial, such as handing out symbolic alms, others mantled with pomp and pageantry — the opening of Parliament or the hosting of a state dinner.

During her long reign, Elizabeth managed to keep her personal life intact and avoided private scandal and public controversy.

She also did not grant interviews, publish her journals or involve herself in party politics.

But by then, Edward (called David by his family) was in love with the American socialite Wallis Simpson, whose impending divorce — her second — made her unfit to become his queen in the eyes of the British establishment, including the Church of England.

However, Edward abdicated and his brother became King George VI.

Suddenly, at the age of 10, Elizabeth lived with a king for a father and the likelihood that she would be queen one day.

She was tutored in British history, and the lives of the monarchs and their fraught relationships with Parliament became less an academic lesson than a map for navigating public life.

She was taught to drive a carriage and to ride sidesaddle, a skill needed later on when she reviewed her troops.

During World War II, which ended when she was 19, she conspicuously did not sail to the safety of Canada, as some had advised, but stayed in England and joined the army.

By then, she had found her life’s companion, Prince Philip, also a great-great-grandchild of Queen Victoria and the son of an exiled Greek prince.

Philip was making his mark as a young officer in the British navy under the patronage of his uncle, Louis Mountbatten.

Their wedding on Nov. 20, 1947, amid post-war reconstruction, was described as a storybook nuptial between a radiant princess and a dashing blond naval officer.

The Queen, who was survived by her four children, eight grandchildren and 12 great-grandchildren, steered the monarchy through turbulent times, as Britain’s Empire ended and its place in the world fundamentally changed.

She was head of state of the UK and 14 other countries, including Australia, Canada and Jamaica.

Leaders from around the world mourned her passage, describing it as the end of an era.

The UK Prime Minister Liz Truss, who was appointed by the Queen on Tuesday, described her as “the rock upon which modern Britain was built”

“Today, the Crown passes, as it has done for more than a thousand years, to our new monarch, our new head of state, His Majesty King Charles III. With the King’s family we mourn the loss of his mother and come together. We offer him our loyalty and devotion, just as his mother devoted so much to us for so long,’’ she stated.

The United States President, Joe Biden and first lady, Jill Biden, in a statement, said Elizabeth was more than a monarch, describing her as a steadying presence and a source of comfort for many Britons.

The American first family said, “Her Majesty Queen Elizabeth II was more than a monarch. She defined an era. In a world of constant change, she was a steadying presence and a source of comfort and pride for generations of Britons, including many who have never known their country without her.

“An enduring admiration for Queen Elizabeth II united people across the Commonwealth. The seven decades of her history-making reign bore witness to an age of unprecedented human advancement and the forward march of human dignity.”

They continued: “In the years ahead, we look forward to continuing a close friendship with The King and The Queen Consort. Today, the thoughts and prayers of people all across the United States are with the people of the United Kingdom and the Commonwealth in their grief,”

Canadian Prime Minister, Justin Trudeau also expressed his grief over the monarch’s passage. According to him, the Queen’s service to Canadians would forever remain an important part of his country’s history.

He added, ‘’It was with the heaviest of hearts that we learned of the passing of Canada’s longest-reigning Sovereign, Her Majesty Queen Elizabeth II,” Trudeau wrote in a tweet.

“She was a constant presence in our lives – and as we look back at her life and her reign that spanned so many decades, Canadians will always remember and cherish Her Majesty’s wisdom, compassion, and warmth. Our thoughts are with the members of the royal family during this most difficult time.”

French President, Emmanuel Macron tweeted, “Her Majesty Queen Elizabeth II embodied the British nation’s continuity and unity for over 70 years. I remember her as a friend of France, a kind-hearted queen who has left a lasting impression on her country and her century.”

“It is with deep sadness that we learned of the death of Her Majesty Queen Elizabeth II,” Zelenskyy wrote in a tweet. “On behalf of the people, we extend sincere condolences to the @RoyalFamily, the entire United Kingdom and the Commonwealth over this irreparable loss. Our thoughts and prayers are with you.”

Former British Prime Minister Tony Blair described the Queen as the matriarch of the United Kingdom, adding, “We have lost not just our monarch but the matriarch of our nation, the figure who more than any other brought our country together, kept us in touch with our better nature, personified everything which makes us proud to be British,” Blair said in a statement.

He later continued: “We will mourn her. We will miss her. But our overwhelming sentiment will be of gratitude, profound, heartfelt and sincere thanks for what she did, what she stood for, for the life she lived and for what she gave us, her grateful subjects. Her reign was indeed glorious. And it was our great good fortune to have had her reign over us.”

Former US President, Bill Clinton observed that throughout her remarkable 70-year reign, she led Britain through great transformations with unfailing grace, dignity, and genuine care for the welfare of all her people.

“In sunshine or storm, she was a source of stability, serenity, and strength,’’ Clinton said in a statement Former US Presidents, George Bush and Jimmy Carter were also effusive in their praises for the departed monarch, whom they said inspired many Americans.

Former American President Barack Obama and first lady Michelle Obama, wrote, ‘’Back when we were just beginning to navigate life as President and First Lady, she welcomed us to the world stage with open arms and extraordinary generosity. Time and again, we were struck by her warmth, the way she put people at ease, and how she brought her considerable humour and charm to moments of great pomp and circumstance.

“Like so many, Michelle and I are grateful to have witnessed Her Majesty’s dedicated leadership, and we are awed by her legacy of tireless, dignified public service.”

The President, Major General Muhammadu Buhari (retd.), in a statement by his spokesman, Garba Shehu, expressed sadness over the monarch’s death.

He stated, “My family and I, and the more than 200 million Nigerians have learned with immense sadness of the passing of the Queen and the end of her unique and wonderful 70 year reign. Her late Majesty was the only British Sovereign known to 90 percent of our population.

“Our thoughts and sincere condolences are with the Royal Family and the people of the United Kingdom and the entire Commonwealth as we join the entire world in mourning her loss.”

Mourning Her Majesty, the presidential candidate of the ruling All Progressives Congress in Nigeria, Asiwaju Bola Tinubu, said the “United Kingdom has lost one of its greatest ever monarch and the world has lost a much cherished, revered and admired  icon.

“Her Energy, dedication, deep sense of duty and firm belief in the glory of the United Kingdom, particularly in the most troubling and troubled times of her long and distinguished reign, are the lasting legacies for which she shall always be remembered.

“As the first British monarch to reach seven decades on the throne, her patriotic role birthed and sustained warm and enduring friendship between the United Kingdom and Nigeria.

“Her visits to these shores were always beautiful occasions and the respect and esteem with which she was always held by the Nigerian people helped to maintain the strong bond of friendship that subsists between our two nations.

“My family’s thoughts and prayers are with the new King, Charles III, the entire Royal Family and all commonwealth nations at this time of mourning and sadness. May she rest in eternal peace.”