The President of Ohaneze Ndigbo Lagos State, Chief Solomon Ogbonna Aguene has pledged his unalloyed solidarity for the Gov. Babajide Sanwo-Olu led administration, while promising the Governor full support from the Igbo Community in Lagos state, ahead of the 2023 elections.

He stated this while receiving an award of Excellence from the Grand Nigeria Business (GNB) News, at his Lagos office.

The President of Ohaneze Ndigbo Lagos State, Chief Solomon Ogbonna Aguene who was among the personalities selected for award of excellence by Grand Nigeria Business News and Awards, on Friday July 8th 2022 received his own award of excellence in Socio-cultural development in Lagos state at his office. 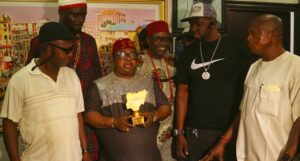 The most deserving award became necessary in recognition of his immense contributions to Ndigbo in Lagos state especially in areas of welfare and relationship building with Lagos state Government, thus creating an effective access to the Government of the day.

In appreciation, Chief Solomon Ogbonna Aguene pledged to continue his good works for Ndigbo in Lagos State and beyond, especially in this electioneering period where Igbos are usually at the centre of every political discussion in Lagos state. He assured Ndigbo in Lagos, that his structures in every local government areas will be activated for the benefit of all especially in areas of security and welfare.

Furthermore, he pledged full solidarity for Gov. Babajide Sanwo-olu, promising the Governor undiluted support from the Igbo Community in Lagos state, in the upcoming elections.

The presentation of award, had other chiefs, friends and well-wishers of the President in attendance.

The Publisher of Grand Nigeria Business News (GNB), Dr. Chuks okosi, while presenting the award of excellence for socio-cultural development in Lagos state to President Solomon Ogbonna, commended him for his achievements and encouraged him to make efforts as a father, towards achieving a united Ndigbo in Lagos State, having created an unprecedented cordial relationship between Ndigbo and the Lagos State Government.

He further announced to the cheering public that the 2nd edition of GNB Award has been slated to hold on November 13th 2022 at Oriental hotel, Lagos and everyone is encouraged to log on to www.gnbawards.com to nominate their preferred candidates for each category.

Chief Solomon Ogbonna Aguene, received the award amidst cheers and congratulatory accolades from friends and supporters present who expressed gratitude for the recognition and promised to support the President for his good works especially in his resolve to mobilize all Ndigbo for the 2nd tenure of Governor Babajide Sanwo-Olu.