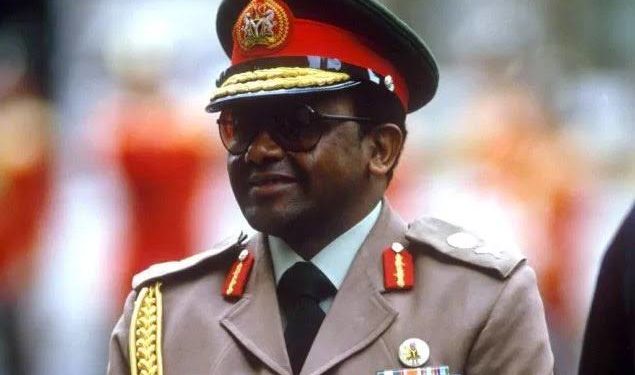 The federal government of Nigeria has signed an agreement with the United States of America on the return of Mecosta/Sani Mohammed assets, otherwise referred to as General Sani Abacha.

The Attorney-general of the Federation and Minister of Justice, Abubakar Malami, SAN, who signed the agreement on behalf of the federal government, said the money was part of the looted stolen funds traced to former Military President, Sani Abacha.

Part of the Abacha loot to be returned to the Nigeria, according to the US government is $23,439,724.

The United States was represented at the signing ceremony by its Ambassador to Nigeria, Ambassador Mary Leonard.

Malami disclosed that both countries arrived at the decision after many negotiation meetings between the representatives of the Federal Republic of Nigeria, United States Department of Justice (USDOJ) and the UK National Crime Agency (NCA).

The AGF expressed his gratitude towards the efforts of the Governments of the United States and the United Kingdom in ensuring that looted funds recovered are returned to Nigeria not only in this instant case but in other pending cases such as Bayelsa, Galactica, Blue Trust and Saborne assets.

Malami recalled that since 2016, the FMOJ, the UK NCA and the USDOJ have been working closely with the legal representatives of the Federal Government to finalise litigations related to Abacha-linked assets.

“Further to the agreement between the parties, the UK High Court granted the NCA a Registration and Recovery Order, dated 28 July 2021 and sealed by the Court on 4th August 2021” the AGF said.

Malami disclosed that the forfeited Mecosta/Sani assets were subsequently transferred to the National Crime Agency, which on February 7, 2022, held the sum of $23,439,724 pending the execution of the asset return agreement agreed between Nigeria and the USA.

Following the court order, Malami said the Federal Government and the USA have negotiated and finalised the terms of the asset return agreement.

“It is worthy to note that in line with the terms of this Agreement, Mr President has already approved the funds to be utilized for the on-going Presidential Development Infrastructural Funds (PIDF) projects namely; Abuja-Kano Road, Lagos-lbadan Express Way and the Second Niger Bridge under the supervision of Nigerian Sovereign Investment Authority (NSIA).

“The President’s mandate to my office is to ensure that all international recoveries are transparently invested and monitored by civil society organization to complete these three projects within the agreed timeline,” Malami stated.

The AGF, therefore, urged the Government of the United States not to relent in supporting Nigeria’s commitment to the speedy and transparent management of returned assets.

“As partners in the global effort fo promote an effective implementation of the United Nations Convention against Corruption, and against the background of constrained economic resources, I urge you to support us in meeting these critical priorities of the FRN by working with us to finish the projects already agreed under the 2020 Tripartite agreement among Nigeria, USA, and the Bailiwick of Jersey for the benefit of Nigeria and its citizens” Malami said.

On her part, the US representative said the US Department of Justice and the Federal Bureau of Investigation seized the funds in response to General Abacha and his associates’ violation of US laws when they laundered the assets through the US and into accounts in the United Kingdom.
“These actions were flagrant breach of the Nigerian people’s trust, but today is the result of an extensive and high level corporation between the US, the UK and the Federal Republic of Nigeria to make the Nigerian people whole.

“This agreement is also kind of collaboration that our government must continue in order to right the wrongs committed under the previous regimes, combined with a $311.7m seized and repatriated with the assistance of the Bailiwick of Jersey and the government of Nigeria in 2020.

“This repatriation brings to the total amount of funds repatriated in this case by the US to more than $334.7m. As a result of today’s agreement, $23m will be transferred to the Nigerian Government, which through the Nigerian Sovereign Investment Authority, NSIA, will use the funds to continue the construction of three key infrastructural projects located in strategic economic zones throughout the country- The 2nd Niger Bridge, Lagos-Ibadan Expressway and the Abuja-Kano Road,” she stated.