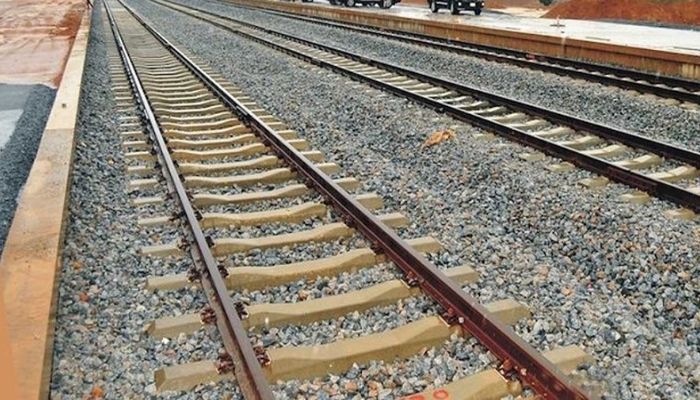 More than one year after President Muhammadu Buhari inaugurated the commercial operations of the $1.5 billion Lagos-Ibadan Standard Gauge Rail Line, the rail track is yet to start moving containers from the Apapa Port to the Ibadan Inland Container Depot.

Inaugurated on June 10, 2021, the 157-kilometre rail line, which started passenger services from Lagos to Moniya in Ibadan on June 15 of that year, was meant to support an end-to-end logistics supply chain in railway transport within the Lagos-Ibadan corridor.

According to Rotimi Amaechi, the then minister of transportation, Lagos-Ibadan standard rail line will enable the transportation of containers by rail directly from the Apapa Port straight to the Inland Container Depot in Ibadan from where they can be moved with trucks to factories and markets where they are needed.

But fourteen months later, China Civil Engineering Construction Company (CCECC) Nigeria Limited, the project contractor, has not successfully completed the rail project by linking the last phase of the standard rail line, which is from Ebute-Meta, to Apapa Port.

Before the commissioning, the CCECC was only able to complete the track from Ebute-Meta down to Ibadan, while the final track that gets to the port from Ebute-Meta to the quayside (seaside) of the Apapa Port, where imported containers can be lifted directly from the ship to the rail wagon, has not been completed.

To successfully evacuate goods from Apapa, the Lagos-Ibadan rail track has to pass through major terminals in Apapa including ENL Consortium, Apapa Bulk Terminal, and APM Terminals.

After the commissioning, the track laying to Apapa Port hit a brick wall at the APM Terminals, Apapa container terminal, where it was discovered that the Nigeria Customs Service (NCS) scanning building, built under the Destination Inspection Scheme a few years back, and its examination bay, were sitting in the way of the rail track.
According to CCECC, there was about 100 metres of track left to link the rail to the Apapa Port quay but the project has been stalled for over a year now.

Amaechi tried to get the Customs management to consent to the removal of the scanner and its building but to no avail.

This issue lingered till Gbemisola Saraki, the immediate past minister of state for transportation, had to prevail on Customs to allow CCECC to link the rail line by partially bypassing the building, which was said to have a radioactive scanner that can only be moved by professionals.

“The contractor has been able to find a way to extend the standard gauge line after bypassing the Customs long room, which was made possible by the directive given to parties responsible during the last visit of the former Minister of State for Transportation,” he said on the phone.

According to him, the Federal Government is perfecting plans to start moving containers from Apapa Port using the new standard gauge line, and the corporation is still hauling export goods to the port using the narrow gauge line.

“NRC has never stopped moving containers via railway from Apapa Port to some terminals including Ijoko in Ogun State. At least, about 38 boxes of 20-foot containers or 19 boxes of 40-foot containers are moved using the rail wagon per trip but the standard rail will bring efficiency to our service,” he added.

Confirming this, Usman Abubakar, public relations officer of the Apapa Command of the NCS, said the rail line would affect the building in question partially and not the entire structure.

According to him, the scanner, which belongs to the Customs, has been removed while it is left to move the overtime containers to the terminal at Ikorodu.

Xia Lijun, deputy managing director of CCECC and the project manager, said the Lagos-Ibadan rail line can only become profitable if it starts freighting containers, exports, and other cargoes in and out of the port.

Tony Anakebe, a renowned maritime analyst, said having a port that only evacuates cargo by road is inefficient, and will continue to create congestion.

According to him, a certain percentage of cargoes that come into Nigeria must be moved through alternative transport systems such as railways to enable seamless evacuation, reduce the volume of damages on transit cargoes and reduce the cost of transporting goods for shippers.