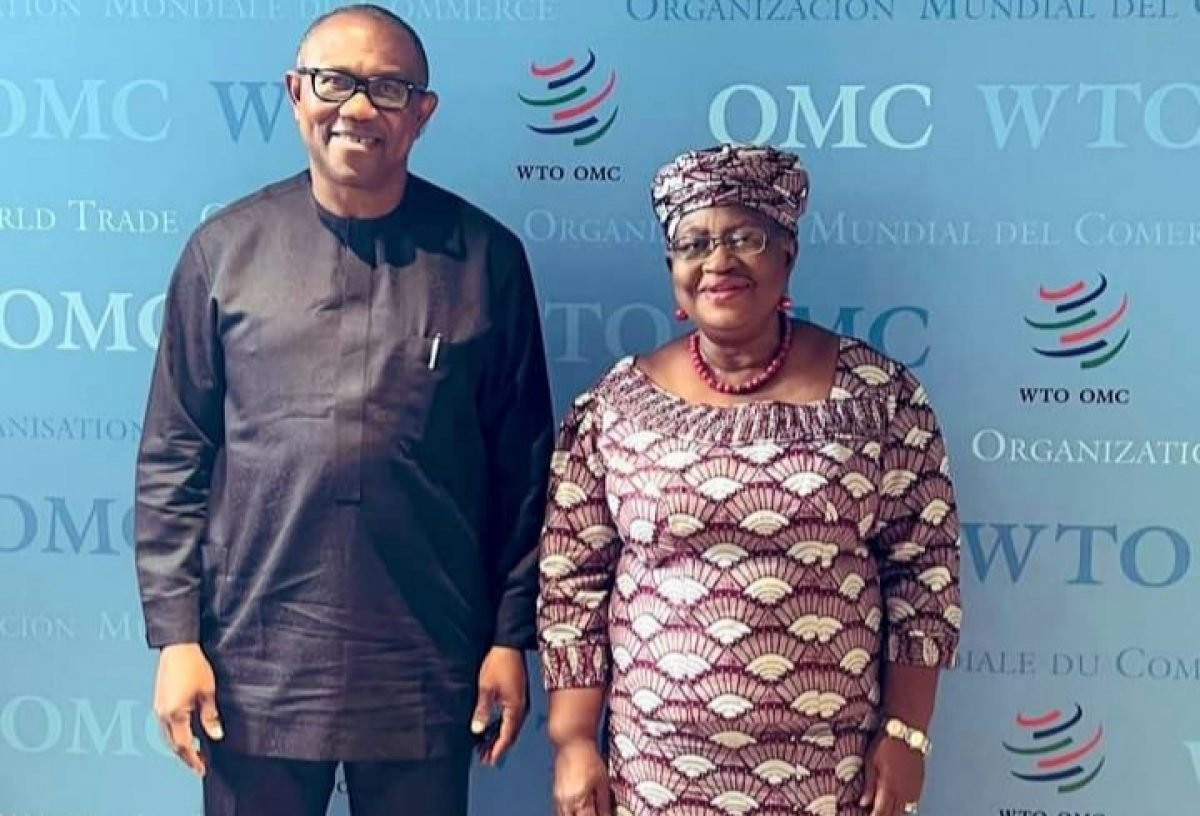 The WTO boss disclosed this via her verified Twitter handle.

She wrote: “With Governor @PeterObi at the @WTO discussing Nigeria’s economic recovery and the role of trade.”

The Labour Party presidential candidate is currently on a foreign tour to meet with his supporters in Canada, Germany, London, Rome, the United States, Switzerland, where it is expected he would raise a substantial amount of the funds needed for the election, through crowdfunding.

Founder of Centre for Values in Leadership, and one of the leaders of Labour Party (LP), Professor Pat Utomi, recently revealed that the crowdfunding portals Nigerians in the Diaspora planned to launch for Obi, would be unveiled next week.

But some senior lawyers have expressed differing views on the legality of the election funding process.

Obi had in a series of Tweets during one of the meetings urged Nigerians in the diaspora not to despair or become weary in contributing their quota towards nation-building, despite the present state of insecurity in the country and parlous economy.

He pledged that his administration, if elected, would have zero tolerance for corruption and cut cost of governance.

According to him, “Our total commitment to transparency and accountability in government business is the only credible way to achieve limited to zero corruption.

“Africa will remain the centrepiece of our foreign policy. We will improve Nigeria’s diplomatic sphere of influence via peacekeeping, trade, and investment initiatives. We will pursue aggressively modalities for raising the national Internet penetration, as well as increase contribution of ICT to overall economic growth to aid national development.

“We intend to lay special emphasis on critical infrastructure, especially power, to ensure a clear measurable increase of 200 per cent of today’s generation, transmission and distribution within the shortest time possible through public private partnership.

“We will pursue intangible assets of good governance, rule of law, security of lives and properties, through an aggressive increase in personnel and equipment and inclusive training of operatives in our security agencies.

“We will emphasise patriotism, national interest, and national morale, quality of government, political will and character, which are all complimentary to the other assets. We will ensure that we have these assets in place and stress asset optimisation.

“Thinking through 2023 and beyond, we must think seriously about a leadership that is imbued with competence, capacity, credibility and commitment. The 4 Cs will be required to turn Nigeria around. Patriotism cannot be imposed; just like respect, it must be earned through dedication, responsiveness, active engagement, orientation, and prioritising of Nigerians in diaspora. The ripple effect will be rapid and will rub off positively on the country’s economy.”