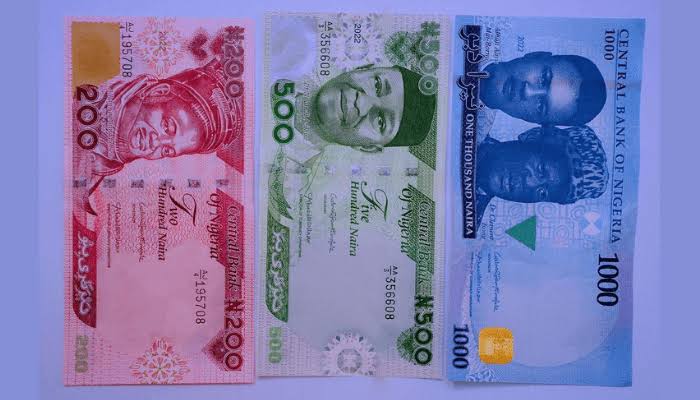 The newly redesigned naira notes will go into circulation on Thursday (today) with Deposit Money Banks releasing the bills to their customers via over-the-counter payments.

The President unveiled the redesigned notes across the N200, N500 and N1,000 denominations.

The Governor, Central Bank of Nigeria, Godwin Emefiele, had in October announced that apex bank would release re-designed naira notes by December 15, 2022.

He also disclosed that the old notes would cease to be regarded as legal tender by January 31, 2023.

Emefiele pointed out that the redesigning of the naira notes would help to curb counterfeit notes, and reduce ransom payments to terrorists and kidnappers.

The CBN boss said it was worrisome that 85 per cent of the total currency in circulation was being hoarded by Nigerians.

Meanwhile, top officials of commercial banks confirmed to our correspondent on Wednesday they had received the new notes from the CBN a couple of days ago,  adding that the redesigned currency would be released to their customers effective Thursday (today).

“We got the funds (new notes) about two days ago. Our head office has dispatched the funds to various area offices across the country. My branch will pick up our allocation at a nearby area office. We will start releasing the new notes to our customers by Thursday,” according to a top official of a commercial bank who spoke to one of our correspondents on condition of anonymity on Wednesday because he was not authorised to speak on the matter.

Multiple banking sources also said the new notes had arrived and were being kept in their vaults.

They confirmed the new notes would be paid to customers in banking halls beginning from Thursday.

“The new notes have arrived, it will be made available to customers from tomorrow (Thursday)” an official of Polaris Bank who pleaded anonymity told The PUNCH.

Also, a manager at First Bank Plc who was not authorised to speak on the matter said, “We have the funds from the CBN now. It came in some days ago but it will be made available to customers from tomorrow (Thursday).”

However, some bank officials claimed the amount of the new notes available to the various bank from the CBN was small.

According to them, most OTC payments will still have to be made using the old notes because the amount of the available new notes is still small.

Also, multiple banking sources confirmed they have started to reconfigure their ATMs to identify the new naira notes.

A top bank executive said, “Most of the banks have started reconfiguring their ATMs so that they can identify the new notes of N1000, N500 and N200.,”’

Meanwhile, findings from the CBN show the total amount to be released into circulation may not be much as the sum previously in circulation.

A top official of the CBN, who spoke on condition of anonymity, said the CBN was planning to increase electronic payments and not cash transactions.

According to him, the CBN will not be printing large amount of the new notes.

He said, “The CBN has been disbursing the new naira notes to the banks but does not intend to disburse large quantities because it wants to boost electronic payments.

“Don’t expect that there will be a large circulation of the new notes in the economy. There are different electronic channels that people should be using.”

Barring any last-minute change of plans, the House of Representatives will on Thursday (today) grill Emefiele over the new cash withdrawal limits policy which restricts OTC payments for individuals and companies to N100,000 and N500,000, respectively.

The CBN had, in a memo introducing the policy, said third-party cheques above N50,000 would no longer be eligible for OTC payment while extant limits of N10m on clearing cheques still remained.

The circular also directed banks to load only N200 and lower denominations into their ATMs and restricted withdrawals from ATM to N20, 000 per day. Withdrawals from PoS terminals were also limited to N20,000 daily.

The policy, which will become effective on January 9, 2023, has generated criticisms but the CBN clarified last Wednesday that PoS operators could apply for a waiver.

The House had last Thursday summoned the CBN governor to appear before it to explain the policy.

House of Reps sources told one of our correspondents on Wednesday that Emefiele was being expected in the chamber as planned.

Meanwhile, the Senate on Wednesday called on the CBN to review the newly introduced cash withdrawal limits policy.

It also directed its Committee on Banking, Insurance and other Financial Institutions, to embark on an aggressive oversight of the central bank.

The Chairman of the committee, Senator Uba Sani (APC Kaduna Central), had in the report argued that the proposed cash withdrawal limits policy was well conceived by the CBN for the transformation of the nation’s economy, noting that the action falls within the mandate of the apex bank as provided for in Section 2(d) and 47 of its extant Act .