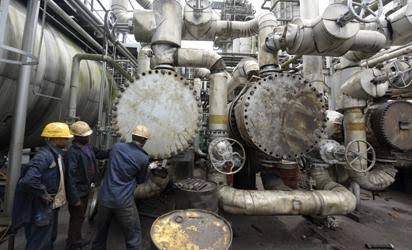 Nigeria Needs More Than Oil Production Revenue To Save Itself.

Crude oil producers under OPEC and its partners, OPEC+, got into a head-on collision with governments around the world trying to tame inflation, which has been triggered by high energy prices as OPEC+ agreed to a 2 million BPD cut.

The reduction would mean eight countries reduce actual production and achieve the real cut of only 880,000 barrels a day, according to Bloomberg calculations based on September output figures.

OPEC members had expressed worries that the global economy is slowing down quickly in the face of quickly tightening monetary policy, which they say would be reflected in a larger-than-expected drop.

The market adjusted immediately to the output cut as Brent Crude continued its climb towards $100, to $97.90 a barrel by Sunday, a welcome relief for all major Crude Oil producers, except Nigeria.

Last month it was announced that Nigeria’s daily crude oil production fell below 1 million barrels per day (BPD) for the month of August to 972,394 BPD, which was below Angola’s average daily output of 1.17 million barrels.

The Nigerian Upstream Petroleum Regulatory Commission report cited that Nigeria’s monthly average was 972,394, compared to 1,03,899 for the previous month.

Nigeria’s problems, got even worse, when Mele Kyari, the CEO of NNPC Ltd, told Nigerian Lawmakers in a press briefing on crude oil theft that it has so far shut down the operations of 395 illegal refineries.

He also revealed that an illegal connection of four kilometers route into the sea running from its major Forcados line, which he estimates has been around for 9 years, citing that crude theft by vandals reduced Nigeria’s oil production to around 1.2 million barrels per day from 1.8 million.

Kyari warned: “To be very precise, we have never seen this level of escalations in our operations.

“The scale of oil theft, vandals that we are seeing today is unprecedented, prices of crude oil are so high in the market today, for oil thieves to operate.

“But we have put a structure of security hovering around our partners, all the government security agencies, we have set up private contractor security.

“The Brass, Forcados, and the Bonny terminals, are all practically doing zero production today; the combined effect is that you have lost 600,000 barrels per day when you do a reality test.

“But we hope to restore production to the Forcados terminal; this is as a result of the security intervention that is ongoing,” he said.

How big are Nigeria’s issues

Vandalism has been a problem for businesses in the Niger Delta for a long time. The 180,000 barrel-per-day Trans-Niger Pipeline running dry exemplifies the severity. According to an industry union, utilization between October 2021 and February was as low as 5%.

This has roughly affected Nigeria’s production to the tune of 600,000 BPD as Forcados, Bonny, and Brass have all been shut down as a result of crude oil theft.

Gbenga Komolafe, the chairman of the Nigerian Upstream Petroleum Regulatory Commission, added that only roughly 132 million barrels of the 141 million barrels of oil produced in the first quarter of 2022 were received at export terminals.

According to Nigeria’s Budget Office, government oil earnings through November were only about half what was expected, despite higher oil prices, this has seen a drop in foreign exchange revenues as Nairametrics reported that Nigeria’s foreign reserves have fallen by $2.202 billion to $38.318 billion as of September 29, 2022, from $40.520 billion as of December 31, 2021. This is a 5.42% decrease in foreign reserves, despite higher oil prices.

The Central Bank noted that it would continue its  intervention policy with the hope that the oil price surge would boost the reserves.

So what does Nigeria need?

The Nigerian Government has commenced a scheme to expose oil theft. In partnership with the armed forces, FG has been making inroads in clearing out illegal refineries.

However, petty criminals alone are not responsible for building four kilometers of pipelines route into the sea running from its major Forcados line; the Nigerian Government must have a difficult discussion with itself.

The increase in crude oil price won’t make a difference for Nigeria until inclusive measures are placed towards the welfare of those whose pipelines are passed through their lands, for now, we get high oil prices and nothing more.