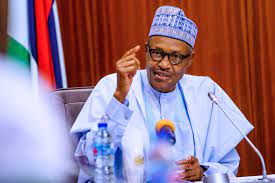 No employment opportunities in the government sector again- Buhari to Nigerian Youths.

The President, Major General Muhammadu Buhari (retd.), on Wednesday, urged youths to acquire knowledge not towards getting government jobs as there are no “jobs in government anymore.”

He also urged youths to acquaint themselves with history to avoid making the same mistakes of the past.

According to a statement signed on Wednesday by his Senior Special Assistant on Media and Publicity, Garba Shehu, Buhari said this when he paid a Sallah homage visit to the Emir of Daura, Faruk Faruk, at his Palace.

The statement is titled ‘Train, educate your children on right values, the world is changing, President Buhari tells Nigerians.’

He implored parents to inculcate right values in children, including deep fear of God, respect for constituted authorities and living a purposeful life through continuous education.

“We should ensure the children get proper education. The knowledge they acquire should not be towards getting government jobs.

“We don’t have jobs in government anymore. With technology, governments are becoming smaller, nimble and efficient.

In his remarks, Governor Aminu Masari claimed that, having fed at least 863,000 children under the school feeding programme in Katsina, adding that no government has done more to reduce poverty like the Buhari regime.

He said every contrary view is held by those who “only think of themselves” and are “never appreciative until something gets to their pockets.”

Masari said, “No government in the history of this country has done more to reduce poverty like President Buhari’s administration.

“He asked religious and community leaders to bring enlightenment to bear on successful government programs such as the Social Investment Program, SIP through which 120,000 poor citizens in 12 Local Government Areas of the state receive a monthly payment of N5,000 and this is happening in all the states.

“Today, we have over 863,000 children in the state being fed under the school feeding program. This has created 10,000 jobs for women cooks, 14,000 young men and women enrolled in N-Power.

“We have food vendors who are engaged and earning their livelihood. All the foolish talk on social media is by those who only think of themselves. Our elites are never happy or appreciative until something gets to their pockets.”

Masari who said security in the country had improved considerably under Buhari lamented that “human beings forget easily”.