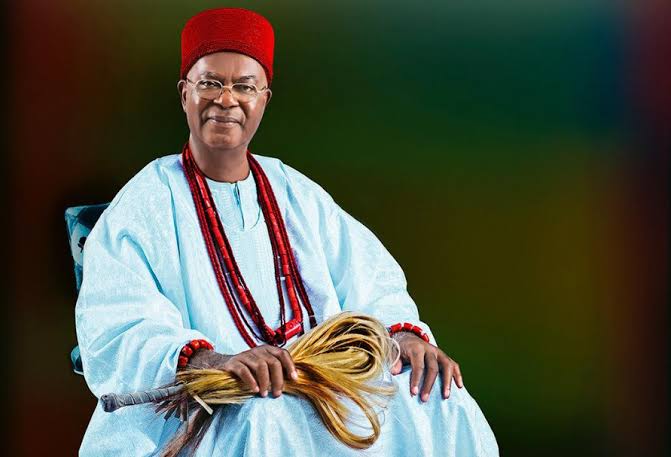 Obi of Onitsha sef to celebrate 20 years on throne alongside Ofala Festival.

Nnaemeka Achebe, the Obi of Onitsha, is set to celebrate the Ofala festival from October 22 to 23 at Ime Obi Onitsha, Anambra state.

This was made known in a statement by the Ofala steering committee on Thursday.

The festival, which would also mark the Obi’s 20th year on the throne, is a celebration of the monarch’s annual emergence from seclusion, a period when he negotiates the fortunes of the kingdom.

“All is set for 2022 Ofala of His Majesty, Nnaemeka Achebe, Agbogidi Obi of Onitsha. The celebration to be held at Ime Obi Onitsha will span two days – Iru Ofala on October 22 and the Azu Ofala on October 23,” the statement reads.

“His Majesty will also be using the occasion of the Ofala to commemorate with thanksgiving his 20th anniversary as monarch. He ascended the throne of Ezechima 20 years ago on May 14, 2002, which coincidentally was his 61st birthday.

“The Ofala is the high point of the Onitsha ceremonial cycle. The Obi of Onitsha is the celebrant of this spectacle which is rooted in deep spirituality. The Ofala is an occasion for the monarch to fulfill certain obligations.

“It is primarily a celebration by the monarch and his subjects of the monarch’s annual emergence from seclusion, during which period the monarch has successfully negotiated the fortunes of the kingdom. It is also a re-enactment of the joy which the monarch shared with his subjects, at the discovery that yam is non-toxic, and a valuable source of food.”

Okey Mike Areh, chairman of the Ofala steering committee, said: “The Onicha Ado N’Idu community is looking forward to celebrating the 2022 Ofala in the normal way after two years in which the Covid19 Pandemic has meant that the ceremonies have had to hold devoid of the usual fanfare.

“We shall now move on with the process of getting the Ofala, to attain the status of a major event in the Nigerian, and by extension in the West African cultural/tourism calendar.”

The event which is supported by Globacom and International Breweries Plc will also feature a royal banquet in honour of the Obi of Onitsha on Wednesday, October 26.

Globacom said it will be empowering the people of Onitsha with gifts and lucky subscribers will have an opportunity to win two tricycles, five sewing machines and five grinding mills in a special Ofala promo.