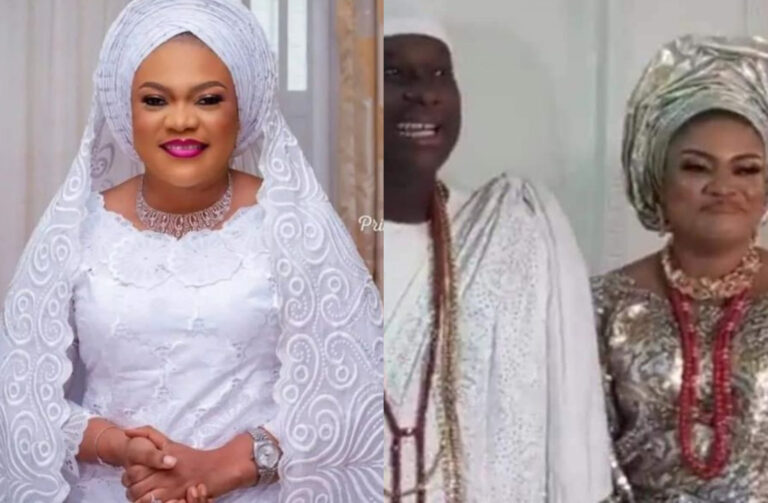 Mariam Anako, the new wife of Ooni of Ife, Oba Adeyeye Ogunwusi, late on Tuesday arrived at the palace of the monarch in Ile-Ife, Osun State.

The new wife was ushered into the palace after brief rites at the entrance to the premises.

She was thereafter led into the inner court of the palace to meet her husband and other guests waiting to receive her.

Oba Ogunwusi in a video shared on the Facebook page of his spokesperson, Moses Olafare, around 10:30 pm on Tuesday, was assisted by chiefs and close aides, in welcoming the new wife into the palace.

Also, Ooni elder brother, Sooko Adegboyega Ogunwusi, and the monarch’s other siblings were also mentioned by the compere at the ceremony as being present.

During the ceremony, Anako’s relations from Ebiraland in Kogi State and Ilorin in Kwara State were also present and they took turn to greet Ooni.

The new wife was coming into the palace about 10 months after Naomi Silekunola, the last wife of the monarch left him.

Specifically, Naomi announced separation with the monarch on Thursday, December 23, 2021, thus ended a marriage that produced a son, Tadenikawo, and lasted about 3 years.

Ooni’s spokesperson, Moses Olafare, could not be reached for further comment on Wednesday as calls to his line rang out. Naomi announced her separation from the monarch through an Instagram post in December 2021.

She had also renounced the title of a ‘Queen’, saying she tried to make the three-year union work but the Ooni’s public identity is at variance with “his true self”.

After the split between 47-year-old Ooni and Naomi, many Yoruba monarchs and elders including the Deji of Akure, Oba Aladetoyinbo Aladelusi, tried to reconcile the estranged couple but the peace talks cannot did not yield results.

Before being coronated king, the Ooni was previously married to Adebukola Bombata in 2008 but the marriage failed. As a monarch, the Ooni married Edo-born Zaynab-Otiti Obanor in 2016 but the union lasted for 17 months before their separation.

He later married Silekunola in 2018 and the marriage produced a son before the divorce announcement in December.

The monarch also had a daughter with Omolara Olatubosun as a teenager. Olatubosun gave birth to Princess Adeola Ogunwusi but recently, there have been counter-claims between the Ooni and Olatubosun over who was responsible for the upbringing of their daughter.

Aside from the Ooni, other traditional rulers who had experienced divorce known to the public include the Oluwo of Iwoland, Oba Abdulrosheed Akanbi, whose marriage to his Jamaican wife, Ms Chanel Chin, crashed in December 2019. Also, Anuoluwapo Adeyemi, one of the wives of the Alaafin of Oyo, Lamidi Adeyemi III, parted ways with him in November 2020.