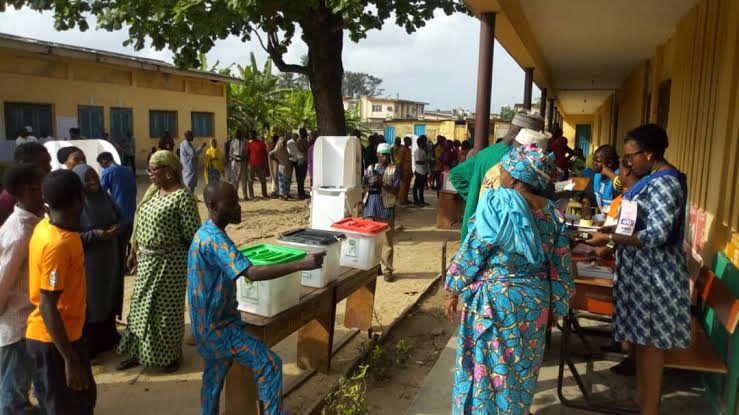 Over 500,000 Security Personnels To Man The Polling Booths – INEC

“In all, we feel assured by the actions we have taken and our collaboration with the security agencies. The 2023 general elections will proceed as planned. There is no plan to postpone the election. A more pertinent issue for the commission is the fate of displaced voters,” Yakubu said.

The INEC boss argued that elections might not be conducted in areas of displacement, noting that despite this challenge, the commission had since 2015 put in place a policy and framework for voting by IDPs.

He added, “If they are organised in camps, we can recreate the polling units and enable them to vote. It was done in 2015, and 2019 and only recently, we convened a meeting with stakeholders to validate the revised framework and policy for voting by IDPs.

“The difficulty we face is with those who are not living in the displaced people camps but are living with relatives in safer communities. It becomes difficult to organize elections for them.

“We have over two million persons in displaced camps across several states and we will organise elections for them the way we did in 2015 and 2019.’’

Yakubu said the amended Electoral Act would, among other things, would reduce the challenge faced by the commission in the area of inconclusive elections as polling is now defined in terms of accredited and not registered voters.

He also told his audience that the law empowered the commission to review the result of elections to ensure that declarations were made voluntarily and that results emerge by the  law, regulations, guidelines and manuals for elections.

The electoral body said it had received the last batch of the Bimodal Voter Accreditation System machines which would be used in the election.

He added, “That puts us on course to perform functional and integrity tests on every BVAS to be deployed for the election, which has been concluded in many states nationwide.

“In addition, we plan to conduct a series of mock trials of the BVAS with actual voters in real-time in parts of the country to further ascertain their functioning in actual election situations.

“Other sensitive materials such as the ballots and result forms are being printed. The commission is progressively taking delivery of them and deploying them to locations across the country.’’

Speaking on the voter register which has 93.4m eligible voters, Yakubu said many claims and objections led to the deletion of several names.

The clean-up of the register, he disclosed, was painstakingly conducted using the automated biometric identification system to detect and delete many multiple registrants.

Clarifying the bottlenecks regarding the collection of permanent voter cards, Yakubu said state offices of the commission had been directed to review the procedure and remove any barriers.

According to him, they are also to deal with allegations of extortion by staff, inducement of officials by registered voters seeking to collect their cards and discriminatory issuance of PVCs.

In the discharge of its responsibilities, Yakubu hinted that the commission had been joined in 791 court cases involving intra-party elections and nomination of candidates by political parties as of January 6, 2023.

In the 2019 general election, the commission said it was involved in 1,689 cases, made up of 852 pre-election, 807 post-election and 30 electoral offences cases.

It pledged to continue obeying clear orders of courts.

Following warnings by INEC that campaign violence and vote buying may impact negatively the 2023 elections, some political parties on Tuesday disclosed what they had been doing to address the challenges.

Speaking on the twin challenges, the Director of Publicity of the All Progressives Congress, Bala Ibrahim, said INEC had nothing to worry about, given the role the APC played in bringing about the 2022 Electoral Act.

He said, “The APC as a party and President Muhammadu Buhari as the leader of the party, midwife the electoral reforms that identified these problems and we are trying to nip them in the bud.

“These are challenges the party has been discussing and telling INEC to ensure that those problems are addressed. So, a party that midwife reforms aimed at sanitizing and bringing changes that will bring dividends to the electoral system will not panic. We will not leave our responsibility of ensuring that the elections are clean, free, fair and credible.’’