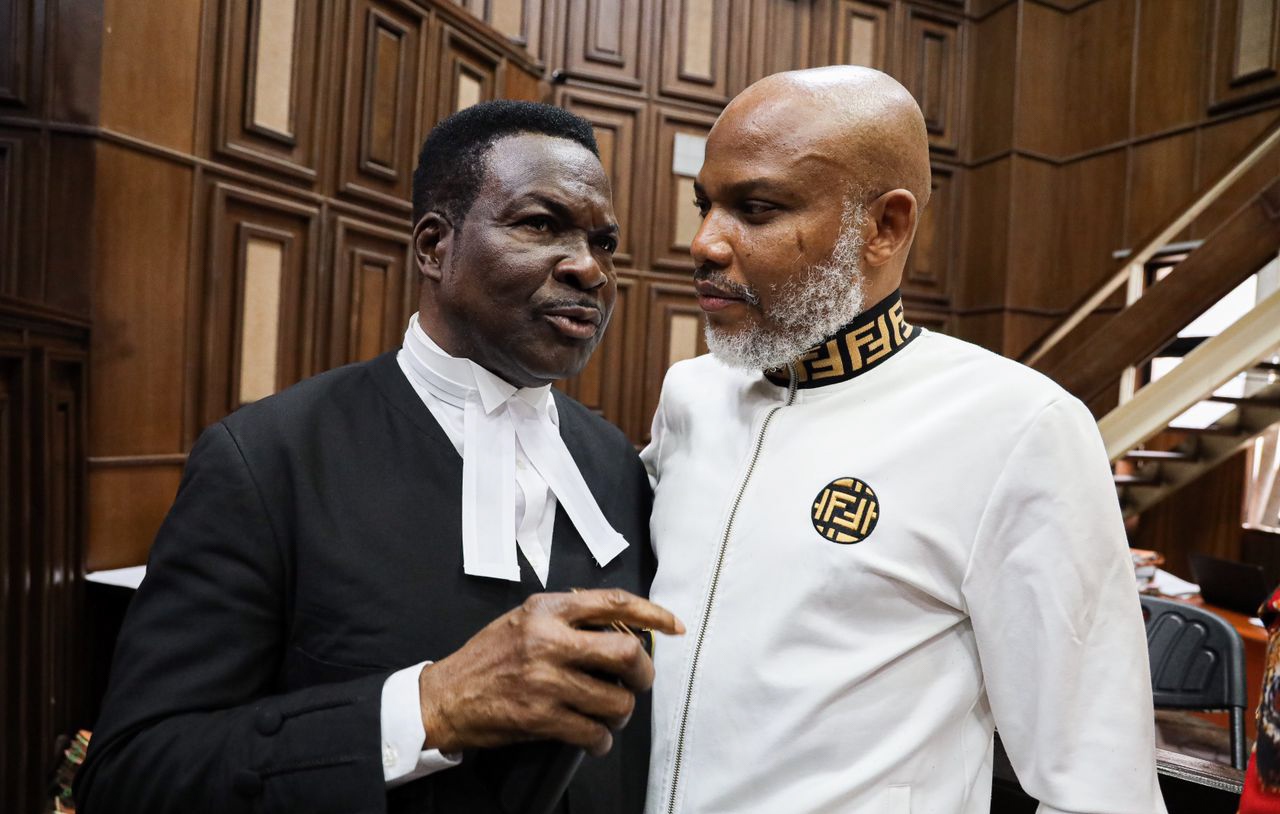 Mike Ozekhome, counsel to Nnamdi Kanu, leader of the Indigenous People of Biafra (IPOB), has called on President Muhammadu Buhari to order the release of his client.

Kanu has been in DSS custody since his arrest and extradition from Kenya to Nigeria in June 2021.

He is on trial for treasonable felony.

In July, the United Nation Human Rights Council Working Group on Arbitrary Detention, in a 16-page report, had reportedly indicted both Nigeria and Kenya governments for the arrest, torture and continued detention of the IPOB leader.

The group also urged the federal government to ensure the “immediate release of Kanu unconditionally” and pay him adequate compensations for the arbitrary violation of his fundamental human rights.

In a letter on Monday, Ozekhome asked Buhari to order Kanu’s immediate release through a more productive “political solution”.

Ozekhome said Buhari can order Kanu’s release in line with section 174, which gives the attorney-general of the federation (AGF) powers to “discontinue at any stage before judgement is delivered any such criminal proceedings instituted or undertaken by him or any other authority or person”.

“You can do this by instructing the Honourable Attorney-General of the Federation to wield his powers under section 174 of the 1999 Constitution to enter a “nolle prosequi”. This will immediately halt the present restlessness and sits-at-home mantra currently ravaging the South East and paralysing business and normal life,” Ozekhome said.

While noting that Kanu’s extradition was carried out “illegally” and “arbitrarily without due process”, the senior lawyer said a “dispassionate consideration of the Report of the UN body will bear eloquent testimony to a litany of grave errors which Kanu’s abduction, and his continued detention and shabby treatment since then by officers and men of the Nigerian SSS, constitute”.

“All these cumulatively constitute, not only gross violation of our client’s fundamental rights under international and Nigerian laws, but, even more worrisome, cast an altogether avoidable pall on Nigeria’s image in the international community,” the letter reads.

“To refuse releasing Kanu unconditionally and immediately is to court international displeasure and multi-faceted backlash. It will hurt Nigeria badly as it will also insinuate that your Excellency does not subscribe to the Rule of law and respect for citizens’ fundamental rights, and your postulations of the just ended United Nations General Assembly (UNGA) which took place between 20th and 23rd September, 2022.

“Your Excellency must avoid these unhealthy reactions by ensuring that Kanu is released immediately and unconditionally now.

“The moral burden of insisting on keeping Kanu in detention is too expensive and too offensive to embrace, especially with his fragile and deteriorating health condition which his custodians (the SSS) have not been able to manage properly. Do not let Kanu die in detention sir.”

Ozekhome also said Buhari would be writing his name in gold by ensuring the release of the detained IPOB leader.

“Your Excellency, the whole world has spoken through the UN Human Rights Committee. The message is quite clear: Nnamdi Kanu must be released forthwith – unconditionally. To insist on detaining him in defiance of the world would be at a great price which is better avoided,” the letter reads.

“Suffice it to say, your Excellency that, just like in the earlier case of Umaru Dikko, your government risks turning Nigeria, once again, into a Pariah State, simply on account of this avoidable conundrum.

“Your Excellency, if the case of Mr. Dikko was understandable because it was carried out by a military regime, that of Nnamdi Kanu is inexplicable and unjustifiable under a democratic government headed by your good self and which operates under a written Constitution that guarantees fundamental rights, the rule of law and the enforcement of duly-ratified international treaties.

“The foregoing narrative clearly shows that this is the case with the relevant treaties under which the United Nations Working Group on Arbitrary Detention issued its binding directive for the immediate and unconditional release of Nnamdi Kanu.

“Your Excellency, I am not aware of any State which has defied or disobeyed such a directive without paying a national heavy price. Nigeria should not be the first member of that “Hall of Infamy” reserved only for pariah nations. That would be another blot on Nigeria’s image.

“The situation is however not irredeemable, as your Excellency can yet redeem it; and write your name in gold by ordering the immediate and unconditional release of Nnamdi Kanu from his present excruciating detention as ordered by the United Nations, through its Working Group on Arbitrary Detention.”

This story is published in partnership with Report for the World, a global service program that supports local public interest journalism.