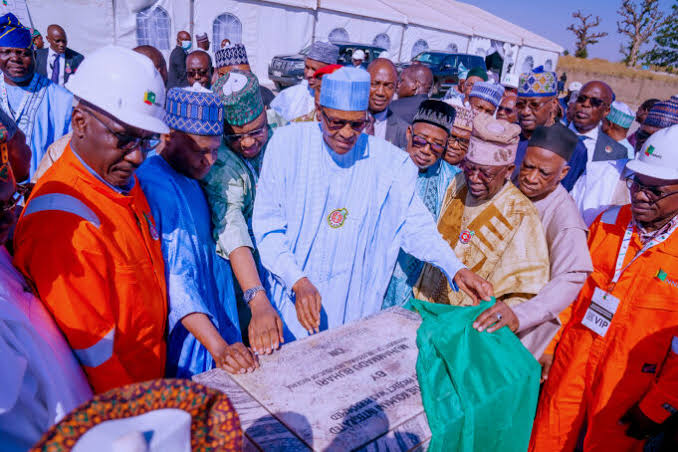 President Buhari Officially Flagged Off The Drilling Of Crude Oil In Kolmani Field In Gombe, Bauchi With 1b Barrels Oil, 500bscf Gas.

Sixty-six years after crude oil discovery in Nigeria, President Muhammadu Buhari, yesterday, officially flagged off the anticipated drilling of crude oil at the Kolmani field, which is lapping on the border of Bauchi and Gombe states.

The first phase of the exploration will entail an in-situ oil refinery of up to 120,000 barrels per day capacity, a gas processing plant of about 500 million standard cubic feet per day, a power plant of up to 300-megawatt capacity and a fertiliser plant of 2,500 tons per day, according to the Nigerian National Petroleum Company (NNPC) Limited.

President Buhari said one billion barrels of crude oil reserves and 500 billion standard cubic feet of gas exists in Kolmani River Oil and Gas Field. He further declared that his administration has attracted over $3 billion in the oil and gas sector at a time of near-zero appetite for investment in fossil energy.

By the announcement, the President became the second person to put a figure to the oil finds after the nation’s petroleum industry was thrown into divergent views when the Minister of State for Petroleum Resources, Timipre Sylva, first mentioned the figure about two years ago.

Speaking at the official groundbreaking ceremony of the Kolmani Oil Prospecting Licenses (OPLs) 809 and 810 at the Kolmani field site in Gongola basin, President Buhari said the development remained significant considering that, “efforts to find commercial oil and gas outside the established Niger Delta Basin was attempted for many years without the desired outcomes.”

According to him, the successful discovery of the Kolmani Oil and Gas field by NNPC and her partners has broke the jinx with the confirmation of huge commercial deposits of hydrocarbons in Kolmani River field.

“We are pleased with the current discovery of over one billion barrels of oil reserves and 500 billion Cubic Feet of Gas within the Kolmani area and the huge potentials for more deposits as we intensify exploration efforts.

“It is good to note that the discovery has now attracted investment for an end-to-end integrated development and monetisation of the hydrocarbon resources,” President Buhari, who doubles as the Petroleum Minister, said.

He added that upstream production, oil refining, power generation and fertiliser are anticipated at the region.

Admitting that the land locked location will create huge capital requirement, making the economics of the project a challenging proposition, the President said NNPC would de-risk the project to attract the much-needed investment.

“It is, therefore, to the credit of this administration that at a time when there is near zero appetite for investment in fossil energy, coupled with the location challenges, we are able attract investment of over $3 billion to this project.

“This will surely be a reference subject for favourable discussion in the industry as we pursue the just energy transition programme that will culminate in our country achieving Net-Zero position by the year 2060,” he said.

Sylva noted that drilling for hydrocarbons at the Upper Benue Trough/Gongola Basin, remain crucial to the nation’s survival, adding that it is a pathway to energy transition.

“We recognise that reduction in fossil fuel revenue, without sufficient time and support to manage macroeconomic risks and the structural transformation required to build a diversified, sustainable and resilient economy, will have catastrophic social knock-on effects for millions of people in Nigeria and this cannot be allowed to happen.

“The risks arising from our current challenges of energy poverty, lack of access to clean cooking fuel, insecurity and unemployment are pervasive across the country, but so is the value proposition to all stakeholders. The reward of getting it right is so huge that we have no option but to stay the course and see it through. This is why I welcome the collaboration between NNPC Limited and its partners in this campaign, and look forward to the expansion of these partnerships with respect to other basins, which will give us a fighting chance to address the myriad of issues that confront us,” Sylva said.

According to him, the new development has enabled Nigeria to redraw its hydrocarbon map to include a region, which was once the subject of speculative optimism, crystallising instead into definitive prospects.

Group Chief Executive Officer of NNPC Limited, Mele Kyari, said the commercial discovery at Kolmani River was a testament to the order of the President that forced NNPC to re-strategise and eventually make history at the location.

He said the company has launched search across the in-land basins on the backdrop of improved security situation, including in the Chad basin.

BUT the Senate President, Ahmed Lawan, advocated for the review of the Constitution to include the utilisation of the statutory 13 per cent derivation for oil producing states. Lawan said he is worried over “what has been happening in the Niger Delta Development Commission (NDDC) with the 13 per cent derivation or maybe the application or misapplication of the resources of NDDC. This is something the new oil bearing states should learn from.

“On 13 per cent derivation, I think we should have a constitutional review on how you apply the derivation. That’s the reason why we have to go for three per cent to host community development. I believe that the host communities here will soon see a lot of activities and will also deserve more resources for their development. I, therefore, advocate that not only the Community Development Funds, even the 13 per cent in the Constitution should have serious bearing on the lives of host communities that bear the brunt of oil exploration.”

He called for urgent diversification of the nation’s economy. “While we are getting the resources from oil, we should be thinking of developing other sectors where our people can be gainfully employed,” he said.

Also, Bauchi State governor, Bala Mohammed, said the state would maintain a peaceful and harmonious environment to ensure that investors have freedom to operate for the benefit of the two states, investors and the nation at large.

His counterpart in Gombe, Governor Inuwa Yahaya, applauded the President for assenting to the Petroleum Industry Act (PIA), which he said suffered delay for more than 13 years at the National Assembly. He called on the President to extend the exploration to the Lake Chad basin for further development of the Northeast region.

According to Gombe State government, the oil well will be contributing to the country’s three million daily capacity in 2030.

President Buhari’s visit to the oil field was an on-the-spot assessment towards laying to rest the controversy over ownership as claimed by both Bauchi and Gombe governments.

Recall that the President once invited the governors and officials of NNPC to London for an enduring resolution, which sources said informed yesterday’s official ground-breaking.

MEANWHILE, presidential candidate of the ruling All Progressives Congress (APC), Asiwaju Bola Tinubu, has pledged to sustain the project if elected president in 2023. He said the President has made history after over 60 years of Nigeria’s oil exploration.

The former Lagos State governor said though Nigerians may be hungry, President Buhari has put the country on the path of prosperity. He added that history would be kind to the President because he is a former general who came to rescue his country when things were gloomy.

“Whatever they say in their social media, traditional comments and write-ups, history will be very kind to you because you are in the class of great retired generals who came to rescue their country,” Tinubu said.

“We may be hungry but we can manage our hunger; we don’t want to kill each other. Today, you gave us a path to prosperity, a path to success. The only thing that I may want to exclude and argue about is the West and Europe. They use our coal and fuel to develop their economy and they ask us to be conscious, but I like your answer.

“We cannot stay hungry and starve to death. We have to take care of ourselves unless they pay compensation to us; that is where we stand.”

The presidential candidate said if elected into office, he would ensure that Lake Chad is “recharged” as a means of tackling hunger and insurgency.