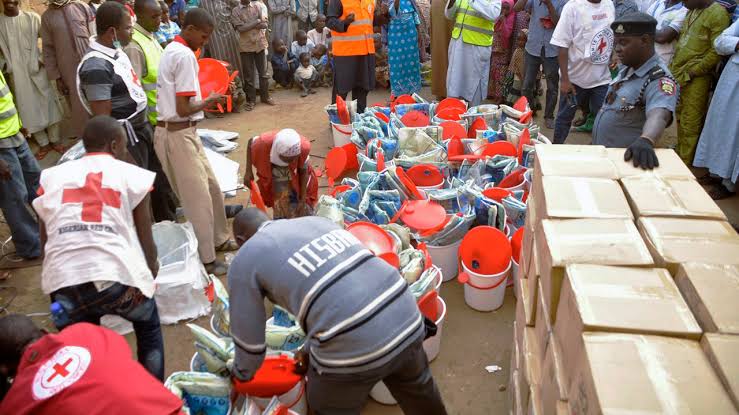 Red Cross Begins The Sharing Of Relief Materials To 1,350 Victims In Kogi State

The Nigerian Red Cross Society (NRCS) on Thursday flagged off the distribution of relief materials to 1,350 victims of flood disaster in Kogi

Abubakar Kende, Secretary-General of NRCS, who flagged off the distribution of the relief items at Budon community in Lokoja Local Government Area, said that the gesture was aimed at alleviating the sufferings of the victims.

The News Agency of Nigeria (NAN) reports that 1,350 flood victims selected across three local government areas of Lokoja, Ibaji and Kogi would benefit from the donation.

The Kogi beneficial were reportedly among the targeted 500,000 most affected people spread across 22 states in the country by the society.

Kende explained, “the 500,000 beneficiaries are the most affected victims identified and selected across the country based on prescribed criteria developed with the members of the communities.”

“In Kogi, 150 households in Budon community, majority of who are aged and vulnerable will be given the relief items.

“Among the beneficiaries in Budon community is a 22-year old Aliyu Sidi who lost his father and mother to the flood disaster.

“By our arrangement, each of the victims will receive 25kg of rice, 30kg of gari, 30kg of beans, 5-litre of palm oil and 25-litre of jerrycan for water storage.

“Needs assessment conducted showed that the most affected persons listed these items as being their priority needs before a registration, using prescribed selection criteria developed with the members of the communities,” he said.

The NRCS Secretary-General put the value of the items to be distributed to the victims at N50 million, donated by the Major Oil Marketers Association of Nigeria (MOMAN) .

He said the donation of the money was in response to the N10 billion international appeal fund launched on behalf of the victims by the NRCS in collaboration with the International Federation of Red Cross (IFRC) sometime ago.

She thanked MOMAN and other donors that have positively responded to the appeal fund launched by NRCS and IFRC on behalf of the victims, urging all Nigerians to continue to be each other brother’s keeper.

MOWAN representative, Mr Sunday Anejoh, said the group’s donation of N50 million to the appeal fund was a demonstration of concern for the plight of the victims.

Adejoh urged the victims to pull themselves together and put the disaster behind them and face the future with strong faith in God.

The Agankyu of Kakanda Kingdom, Malam Mohammed Sanni, thanked NRCS, IFRC, MOMAN and other donors for coming to the aid of the victims.

The traditional ruler urged the NRCS to keep up the good humanitarian work it has been doing over the years and prayed that it continued to growth in strength.