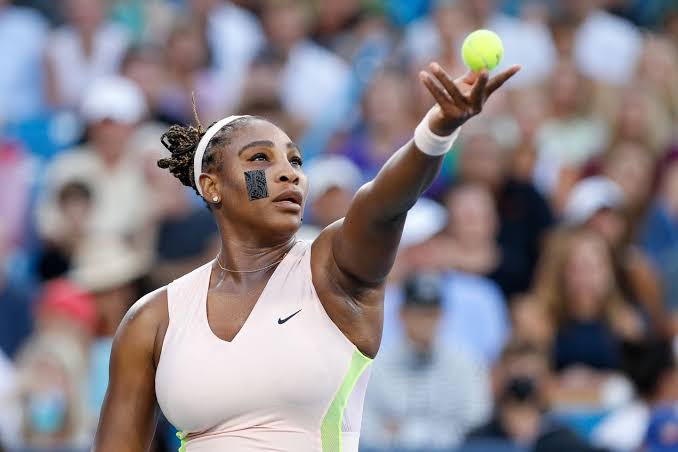 Serena Williams Prepares Farewell To Tennis As US Open Begins.

Serena Williams will take center stage as the US Open gets underway on Monday with the 23-time Grand Slam winner preparing to bid an emotional farewell to tennis.

After announcing earlier this month that the countdown to her retirement had begun, Williams will step on the court at Arthur Ashe Stadium at Flushing Meadows for what could be her final appearance in a Grand Slam singles event.

The 40-year-old sporting and cultural icon won the first of her Grand Slam titles at the same venue in 1999, lifting the trophy as a fresh-faced 17-year-old.

Whether Williams is able to extend her US Open campaign beyond that match remains to be seen.

In her last outing at the Cincinnati Masters earlier this month, Williams was thumped 6-4, 6-0 by Britain’s Emma Raducanu — who herself was knocked out of the Australian Open by Kovinic in January.

Win or lose on Monday, Williams won’t be departing the US Open stage immediately.

On Saturday, organisers confirmed that she and elder sister Venus Williams had been given a wild card into the women’s doubles tournament, which starts on Wednesday.

It is the first time the Williams sisters have played doubles since 2018, reuniting a partnership that has yielded 14 Grand Slam titles and three Olympic gold medals.

Whenever Serena Williams does leave the stage, she will do so after a career that has left a lasting legacy on her sport.

“I just think she’s the biggest thing that will ever be in the sport,” said Japan’s Naomi Osaka on Saturday.

Elsewhere in the women’s draw, Poland’s world number one Iga Swiatek will look to claim her second Grand Slam title of 2022.

The French Open champion won six straight tournaments earlier this season but has struggled to recapture that dominance during the North American hardcourt swing, making early exits at both the Cincinnati Masters and Canadian Open.

Swiatek launches her US Open campaign on Tuesday against Italy’s Jasmine Paolini.

In the men’s draw, Spanish great Rafael Nadal is chasing a fifth US Open crown and 23rd Grand Slam title in a draw that is missing Novak Djokovic.

Djokovic was barred from entry to the United States over his refusal to get vaccinated against Covid-19, putting him at odds with US government travel restrictions for overseas visitors.

With Djokovic out of the picture, Nadal’s biggest opponent over the next fortnight may well be his own injury-prone body.

The Spaniard has had to sit out the US Open four times in his career and there are once again fresh doubts over his physical ability to survive a gruelling two weeks at Flushing Meadows.

Nadal has played just once since an abdominal injury forced him to withdraw from his Wimbledon semi-final with Nick Kyrgios — a first-up loss to Borna Coric in Cincinnati.

Nadal admitted on Friday that he had been protecting his injury in Cincinnati but had been able to practice with intensity in the build-up to the US Open.

“I take it very easy in the Cincinnati, too, in the practices. The match, I try my best without putting all the effort there on the serve,” Nadal said.

“I hope to be ready for the action. That’s the only thing that I can say.”

Nadal begins his US Open campaign against Australia’s Rinky Hijikata on Tuesday.