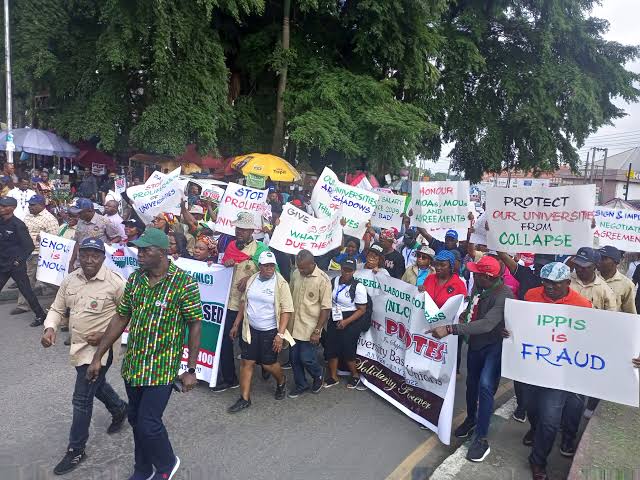 Amid breakdown in talks, efforts to reopen public universities in the country shifted to the courts, yesterday, when the National Industrial Court of Nigeria (NICN) moved the suit instituted by the Federal Government against the Academic Staff Union of Universities (ASUU) to Friday this week.

Citing a breakdown of negotiations, the Minister of Labour and Employment, Dr Chris Ngige, had approached the court to compel the striking lecturers to return to classrooms. Joined in the matter was the Minister of Education, Adamu Adamu, while the President of ASUU, Prof Emmanuel Osodeke, is the sole defendant.

ASUU has been on strike since February 14, 2022, to press home demand for improved funding for universities, implementation of its University Transparency Accountability Solution (UTAS) and a review of salaries for lecturers, among other issues, while several meetings between ASUU and government have ended in a deadlock.  Government had last week announced a 23.5 per cent increase for all categories of workforce in federal universities, except for the professorial cadre, which will enjoy a 35 per cent upward review. Government had also promised that N150 billion would be provided for in the 2023 budget as funds for revitalisation of federal universities, to be disbursed to institutions in the first quarter of next year.  However, ASUU rejected the offer, describing it as inadequate to tackle the myriads of challenges confronting public universities.

The Education Minister, Adamu Adamu, however said President Muhammadu Buhari had warned the government’s team involved in the negotiation against signing an agreement that government would not be able to fulfill.

In a letter dated September 8 and addressed to the chief registrar of the industrial court, Ngige asked that the suit be given an accelerated hearing to resolve the dispute between the union and government.

However, a fresh dimension was added to the case when human rights activist, Ebun-Olu Adegboruwa (SAN), informed the court that he was representing a civil society organisation, the Socio-Economic Rights and Accountability Project (SERAP), who had filed a suit on the same issue before the same court on September 8, asking the court to compel the Federal Government to honour its 2009 agreement with the lecturers.

He cited suit NICN/ABJ/269/2022, with SERAP as the claimant and the Federal Government as the defendant. He then applied that the suit be consolidated and SERAP be joined in the suit as a defendant, instead of multiple suits on the same matter before the same court. According to him, the request to join the suit, if approved, will prevent duplicity of outcomes.

Counsel to the Federal Government, Tijjani Gazali, opposed the application for joinder. He submitted that SERAP’s application was premature as the case was billed for mention on Monday, adding that there was no need for SERAP to pray to be joined in a suit, orally, in a matter that did not have its name on the cause list.

Reacting to Adegboruwa and Gazali’s arguments, Mr Femi Falana (SAN), who represented ASUU, told the court that both counsel had informed him on Monday that they were both filing some papers.

Falana, therefore, urged the court to step down the matter to enable both counsel to file their papers and then return at a later date after which he would have responded to the claimant’s process.

Ruling on the application, the judge, Justice Polycarp Hamman, agreed with the government that SERAP’s application was premature. Hamman said the case would be presided over by a different judge and that he was simply serving as a vacation judge.

Thereafter, the judge ordered parties in the suit to file and exchange court documents and adjourned the case until September 16. He also directed that the claimant should file, serve his process and the defendant to also file and serve his response before the adjourned date.

The Federal Government is asking the court “to interpret in its entirety provisions of Section 18 LFN 2004, especially as it applies to the cessation of strike once a trade dispute is apprehended by the Minister of Labour and Employment and conciliation is ongoing.”

They are also praying for “an order of the court for ASUU members to resume work in their various universities, while the issues in dispute are being addressed by the NICN in consonance with the provisions of Section 18 (I) (b) of the TDA Cap T8. LFN 2004.”

Government also wants the court to determine whether ASUU members are entitled to emoluments for the period they have been on strike.

Unlike other university-based unions, ASUU refused government’s plea to resume while government worked on its demands.

The Non-Academic Staff Union of Universities and other Associated Institutions (NASU), Senior Staff Association of Nigerian Universities (SSANU) and the National Association of Academic Technologists (NAAT) have all suspended the strike but with ultimatum issued to government to meet their requests.

Addressing journalists after Monday’s proceedings, Falana said the government was adopting “dilatory tactics that have a way of prolonging strikes.”

Falana, in company of ASUU president, Osodeke, and other ASUU officials, referenced the resident doctors’ dispute with government last year, which resulted in a suit at the NICN.

“The government is yet to put its house in order. The government has not been able to make a case for the intervention of the court, hence, the basis of adjournment. This is not the first time the government has adopted this rather dilatory tactics that have a way of prolonging strike.

On his part, Adegboruwa told journalists that the Federal Government had abdicated its responsibility of funding public universities, necessitating the filing of SERAP’s suit.

THE National Association of Nigerian Students (NANS) has said it is embarking on a protest starting from today and had threaten to occupy the Lagos-Ibadan expressway today over failure of government to address the seven-month-old strike. Disclosing NANS’ new tactics to get government’s attention, the association in a statement yesterday said it is ready to shut down the economy of the country by blocking the Lagos-Ibadan expressway.

The NANS Southwest Zonal Coordinator, Emmanuel Olatunji Adegboye, called on all students in the zone to join the protest. He urged students to gather at the Shagamu Interchange for the protest.

The statement read: ‘’For over six months, ASUU has been on strike, thereby paralysing academic activities on campus. Unfortunately, the Federal Government has been inconsiderate to the feelings of Nigerian students, which shows that the academic pursuit of students is of no relevance to this administration.  “Last week, a lecturer committed suicide all because of the failure of government to prioritise his wellbeing, leaving behind three children. ‘’It is based on the foregoing that we declare a protest against the prolonged ASUU strike, which has ultimately affected the progress of Nigerian students for the past six months. And, we also pass a vote of no confidence on the Minister of Labour, Chris Ngige and Minister of Education, Mallam Adamu Adamu.”

A group, the Education Rights Campaign (ERC), yesterday, urged the Federal Government to drop the charges against ASUU. This was contained in a statement made available to journalists in Ibadan by Ogunjimi Isaac Ayobami (Deputy National Coordinator) and Michael Lenin (Mobilisation Officer).

‘’We call on the government to drop this plan to victimise ASUU and rather meet the demands of the union in order for public universities to be reopened. The strike action by ASUU which has lasted about seven months without any serious and sincere response and step from the government shows how it is nonchalant about public education. ‘’As a practical step, we are canvassing a peaceful solidarity action by trade unions and civil society organisations at the industrial court tomorrow or any day the matter comes up. We also reiterate our consistent call on the NLC and TUC to declare a 48-hour general strike and mass protest to force the government to meet the demands of ASUU and other unions so that students of public universities can resume their academic activities,” the group said.

Also, the Campaign for Democratic and Workers’ Rights (CDWR) has condemned government’s lawsuit against ASUU. In a statement by Comrade Rufus Olusesan (National Chairperson) and Comrade Chinedu Bosah (National Publicity Secretary), CDWR said this latest step by government is a continuation of the antics to arm-twist the union and possibly lay the legal basis to attack ASUU and its members.

MEANWHILE, mixed reactions have trailed government’s move to refer the dispute with ASUU to the industrial court. Some parents who spoke in Abuja, yesterday, said it was unnecessary for the Federal Government to raise a referral instrument to the NICN to settle the trade dispute, while others also blamed ASUU for the prolonged strike.

Mr Mark Yohanna said: “Taking ASUU to court is a waste of time at this point. The industrial court had been there, why didn’t they think of it since the beginning of the strike, which had lingered for seven months.

“The issues that needed to be addressed are well spelt out by the striking lecturers before they can call off their strike, then why take them to court. I do not think the industrial court will address those issues, except the Federal Government will comply with the agreement entered with ASUU.”

Emmanuel Ejike, another parent, said it was unfortunate that the children of the poor have lost an academic session due to the ongoing strike. He said victims of such strikes were the students and their parents, while the students’ programmes would be extended, parents have been put under pressure and confusion. He urged the government to find an honest way to stop the strike rather than going to court.

Mrs Kemi Olusola, a parent, said referring the trade dispute with ASUU to court would compound the problem. According to her, ASUU itself has said that if the Federal Government wants to resolve the issues within a day, that they have the capacity to do so.

“ASUU is saying that they have not fulfilled the promises that they made so they cannot call off the strike until they see genuine commitment. I think the government should try and see it from ASUU’s point of view, because they want to save the university system in this country, ” she said.

Mr John Osita, another parent, said the strike was long overdue and the Federal Government’s move was laudable.

“I am very happy with the government for finally taking such a decision. I think the court will do justice to the issues in contention. I am pained about this whole strike and I pray that the court will resolve the dispute between the parties as quickly as possible,” he said.