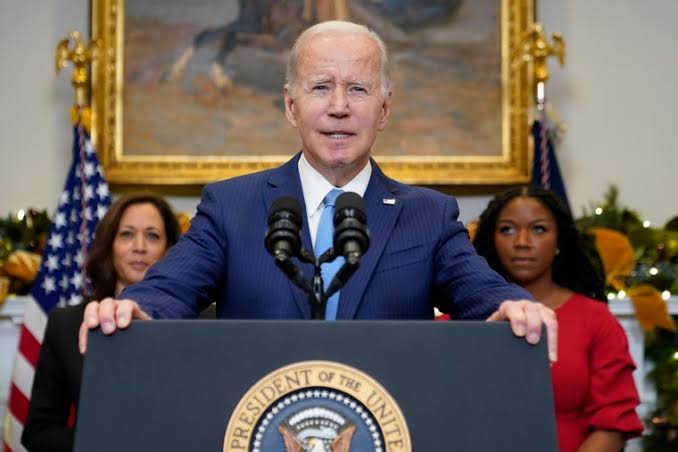 US President Joe Biden threw his support Thursday behind a larger African role in the world as he also vowed to champion democracy in a continent where China and Russia have enjoyed rising clout.

Biden, while announcing $100 million for security, also said the United States would invest $75 million to counteract “democratic backsliding” including by strengthening electoral authorities and civil society.

On Wednesday, Biden met jointly with the leaders of six nations that hold elections next year including Nigeria and the Democratic Republic of Congo, sub-Saharan Africa’s largest countries in population and size respectively, to seek promises on free elections.

“The United States is all in on Africa and all in with Africa,” Biden told nearly 50 African leaders who have spent three days in a wintry Washington summit that featured a gala White House dinner.

“Africa belongs to the table in every room — every room for global challenges that are being discussed,” Biden said.

Biden, who in September called for an African permanent seat on the UN Security Council, backed a permanent African Union role in the Group of 20 economies and said he was planning a visit — the first by a US president since 2015 — to sub-Saharan Africa.

The summit is the first of its kind since African leaders came in 2014 to see Barack Obama.

China for the past decade has eclipsed the United States as an investor, and Russia in recent years has sent in mercenaries and sought diplomatic support against Western pressure.

Biden announced $2.5 billion in new assistance on food as price increases lead to hunger across the continent, especially in the drought-struck Horn.

“Russia’s brutal war in Ukraine has led to the disruption of food and energy supplies that affect all of our economies,” Vice President Kamala Harris told a luncheon.

She told African leaders that “international rules and norms are under threat — for example, sovereignty and territory integrity, unimpeded commerce and peaceful resolution of disputes.”

The Biden administration has been more veiled in its criticism of China, which has poured in funding for high-profile infrastructure projects and lent more than $120 billion across the continent since the start of the century.

The United States at the summit laid out $55 billion in projects over the coming three years including in green energy, training for health workers and modernization of internet networks, with the private sector also pledging $15 billion led by investment in technology.

“The United States will always lead with our values,” Biden told the African leaders.

“Support for democracy, respect for the rule of law, commitment to human rights, responsible government, all are part of our DNA.”

Mark Green, a former congressman and head of the US Agency of International Development, said that the United States was focused on building self-reliance in Africa, while China was looking to “reinforce aid dependency.”

“If a Chinese investment in Africa leads to greater self-reliance, somebody in Beijing is going to lose his or her job,” said Green, now president of the Wilson Center.

China denies US accusations it is putting developing nations into a “debt trap” and in turn has called on Washington not to see Africa through the prism of geopolitical competition.

African leaders largely welcomed the summit. But the continent has also been reluctant to take sides among major powers.

Secretary of State, Antony Blinken, speaking to reporters at the end of the summit, said “America will not dictate Africa’s choices. Neither should anyone else.”

Senegalese President, Macky Sall, the current chair of the African Union, welcomed US support for the institution and voiced appreciation for Biden’s summit.

But he also called for the United States to end longstanding rights sanctions on Zimbabwe and voiced alarm over a bill in the US Congress that would impose sanctions on African countries over dealings with Russia.

“This would be the first time in international relations that a whole continent is targeted,” Sall said.