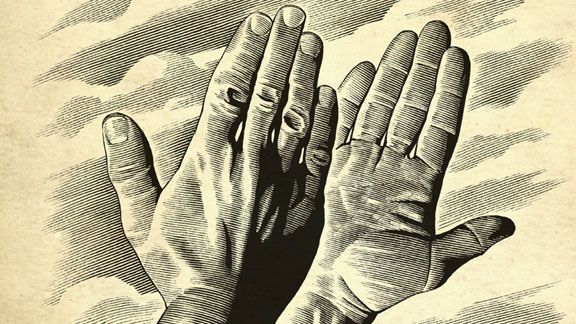 Who Invented the High Five 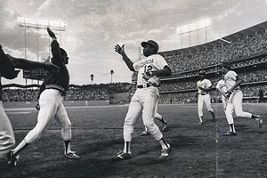 The mystery origins of the High 5

The high five liberated everybody. It gave you permission to enjoy your high points. The high five gesture can be seen in sports, at your kid’s spelling competition, or your office after a killer PowerPoint presentation. It can be seen as a greeting, praise, encouragement, compliment, congratulations, or celebration. A high five touch can help people perform better and feel good about themselves

There are countless creation myths in circulation about who invented the high five. It’s nice to believe that something as magnificent as the high five could be invented only once, in a romantic, unforgettable flash. The truth is, such things are invented many times, by many people.

There are multiple mythologies rewritten over time, entirely credible story of the high five. I will share them with you in three parts. It goes like this:

PART ONE: INVISIBLE MARKS THE COURT

Magic Johnson once suggested that he invented the high five at Michigan State. Others trace it to the women’s volleyball circuit in the 1960s. But the Sleets story quickly shot around the Internet and into local newspapers, displacing, or at least undermining, all other claims. Sleets was budging his way atop the high-five hierarchy.

Sleet was first believed to be the man who invented the high five according to a press release from National High Five Day, in 2007 a group that was trying to establish a holiday for convivial palm-slapping on the third Thursday in April. Apparently, Sleets had been reluctantly put in touch with the holiday’s founders, and he explained that his father, Lamont Sleets Sr., served in Vietnam in the 1st Battalion, 5th Infantry — a unit nicknamed The Five. The men of The Five often gathered at the Sleets home when Lamont Jr. was a toddler. They’d blow through the front door doing their signature greeting: arm straight up, five fingers spread, grunting “Five.” Lamont Jr. loved to jump up and slap his tiny palms against their larger ones. “Hi, Five!” he’d yell, unable to keep all their names straight. Years later, Sleets started high-fiving his Murray State teammates, and when the Racers played away games, other teams followed. In short, Lamont Sleets was both the inventor of the high five and its Johnny Appleseed.

However, when Harrell-Edge reached out to Sleets, because he wanted to talk to the man who invented the high five. Sleet answered the phone call but sounded tired. He was on his way to work, he said, and told Harrell to try back at 4:30 that afternoon. So he did. But he never picked up his call again. In the following weeks, he dialed him more than a dozen times. pleaded in voice mails and texts. He combed local newspaper archives and funeral notices, looking in vain for someone who knew him.

“Sleets was kind of a private person” was all his Murray State coach, Ron Greene, could tell Harrell. (Greene said his memory is so fuzzy that he “couldn’t confirm or deny” the high-five story.) Old-timers in Eminence, still point to invisible marks on the high school basketball court from where Sleets routinely sank jumpers — spots well beyond where the three-point line has since been painted. Steve Frommeyer, Eminence High’s principal, said everyone asked about the high five when the school inducted the guard into its hall of fame four years ago, but Sleets didn’t show up for the ceremony. Years ago, Frommeyer added, the school retired Sleets’ jersey, but it was mysteriously stolen off the gymnasium wall shortly thereafter.

In search of a definitive lead, Harrell-Edge reached out to the founders of National High Five Day: Conor Lastowka, a comedy writer, and Greg Harrell-Edge, who was once named “Laziest Person in America” in a nationwide search by Jimmy Kimmel Live! Talking to them, He suddenly had the good sense to ask whether the Sleets story was even true.

“You know,” Harrell-Edge said, “you are actually the first person to ask us that.”

It was all a hoax, a publicity stunt. They’d concocted the whole story, then scoured college basketball rosters to plug in a name. “We just found the guy and made up a story about his dad,” Lastowka said. He seemed amused that I’d gotten the actual Lamont Sleets on the phone, if only briefly.

IF THIS PRANK HAS A VICTIM, it’s Glenn Burke, a young outfielder for the Los Angeles Dodgers in the late 1970s whose astonishing physique and 17-inch biceps earned him the nickname King Kong.

For at least a generation before the Sleets story surfaced, the conventional wisdom had been that Burke invented the high five on Oct. 2, 1977, in front of 46,000 screaming fans at Dodger Stadium.

It was the last day of the regular season, and Dodgers leftfielder Dusty Baker had just gone deep off the Astros’ J.R. Richard. It was Baker’s 30th home run, making the Dodgers the first team in history to have four sluggers — Baker, Ron Cey, Steve Garvey and Reggie Smith — with at least 30 homers each. It was a wild, triumphant moment and a good omen as the Dodgers headed to the playoffs. Burke, waiting on deck, thrust his hand enthusiastically over his head to greet his friend at the plate. Baker, not knowing what to do, smacked it. “His hand was up in the air, and he was arching way back,” says Baker, now 62 and managing the Reds. “So I reached up and hit his hand. It seemed like the thing to do.”

Burke then stepped up and launched his first major league home run. And as he returned to the dugout, Baker high-fived him. From there, the story goes, the high five went ricocheting around the world. (According to Dodgers team historian Mark Langill, the game was not televised, and no footage survives.)

The high five was a natural outgrowth of Burke’s personality. The Oakland native was an irrepressibly charismatic man who, even as a 24-year-old rookie that season, had become the soul of the Dodgers’ clubhouse. He did Richard Pryor standup from memory and would stuff towels under his shirt and waddle bowlegged around the dugout, imitating Dodgers manager Tommy Lasorda. “He was a joyous, gregarious person,” sports agent Abdul-Jalil al-Hakim says of Burke, a friend since childhood. “He could high-five you without necessarily going through the motion with his hand.”

What most people didn’t know was that Burke was gay and struggled with a drug habit. It escalated in 1987, when a car plowed into him as he was crossing a street, breaking his right leg in four places and stealing his athleticism. He couldn’t hold a job. He went broke. He did some time at San Quentin for grand theft. Then in 1993, he tested positive for HIV. He passed away on May 30, 1995, after a sharp and grisly decline. One obituary noted that, at the end, the man who invented the high five “could barely lift his arm.”

Burke’s sister, Lutha Davis, says Burke himself was pleased to see the high five spilling out of sports to punctuate smaller, everyday joys. “Now when something great happens in life, people do the high five,” she says. “I call it ‘the high five of life.'”

Years after her brother died, Davis was watching Jeopardy! When a question about the inventor of the high five popped up. People who knew Glenn have always known “the truth,” she told me, but it was gratifying to watch some anonymous, Midwestern-looking contestant buzz in right away and say, with unflappable certainty, “Who is Glenn Burke?”

BURKE DIED BELIEVING THE HIGH FIVE was his legacy, and the more I learned about him, the more tragic the Sleets hoax seemed.

At a University of Louisville basketball practice during the 1978-79 season, forward Wiley Brown went to give a plain old low five to his teammate Derek Smith. Out of nowhere, Smith looked Brown in the eye and said, “No. Up high.”

The Cardinals were known as the Doctors of Dunk. They played above the rim. So when Smith raised his hand, it clicked for Brown: He understood how the low five went against the essential, vertical character of their team. “I thought, yeah, why are we staying down low? We jump so high,” says Brown, now head coach at Indiana University Southeast. Brown insists it’s Smith who invented the high five and Smith who spread it around the country.

In fact, high fives turn up in highlight reels of the 1978-79 Louisville team. Occasionally, they’re jerky, thrusting fives — more like spears thrown perpendicularly at the other guy’s torso — but they’re clearly among the first high fives ever broadcast into American living rooms. Midway through the second half of the 1980 NCAA Final against UCLA, Brown posted up against Kiki Vandeweghe and overpowered him, banking in a shot and drawing the foul. In footage of the game, Brown immediately rams his left arm up to slap Smith five. (Brown always made a point of high-fiving with his left hand because as a kid he had his right thumb amputated and it somehow didn’t feel right to high-five with four fingers.) The announcer, Al McGuire, shouts: “Mr. Brown came to play! And they’re giving him the high-five handshake. High five!”

Both Derek Smith and Wiley Brown grew up in small, poor towns in southern Georgia. Smith is said to have arrived on the Louisville campus as a shy stutterer with all of his possessions in one bag. According to Brown, Smith was always blown away that someone with an undistinguished background like his could make an indelible impact on the entire world. “He’d talk about the high five constantly,” Brown says. “It was one of those things he was most proud of, right up there with getting his degree, having his kids and marrying his beautiful wife.”

Derek Smith couldn’t be asked about his invention of the high five. After a respectable NBA career, he died suddenly in 1996 from an undiagnosed heart condition. (His son, Nolan Smith, was drafted out of Duke by the Trail Blazers in June.) But Brown talked about one particular day at Louisville, after Smith got a call about the high five from a big-city newspaper. “Derek was talking about how this was going to go down in history,” Brown says. “It would be something we could tell our kids and grandkids about. I’ve got a smile on my face now just talking about it.”

The newspaper story: a tiny item in The New York Times on Sept. 1, 1980, talks about a burgeoning fad called the high five and the man who apparently invented it, Derek Smith. There’s no mention of Glenn Burke, even though he also apparently invented the high five three years earlier. In fact, aside from Smith and his teammates, there’s only one other person mentioned in the story. The piece begins: “Manager Tom Lasorda of the Los Angeles Dodgers has joined the growing list of ‘high-fivers’ … But the veteran of 35 years in baseball admits he does not know where it all began.” It’s just one of those things, Lasorda told the paper. “Who knows?”

So here’s the question: Did Lasorda purposefully not mention Glenn Burke? Or did Lasorda just forget? I don’t know what to believe. (Through an assistant, Lasorda reiterated that he doesn’t know who invented the high five but didn’t respond to requests for an interview.) Ultimately, the story of the high five is a ghost story, about how we remember and how badly we want to be remembered.

The Supreme Court, Wednesday, restrained the Federal Government from enforcing the February 10 deadline for